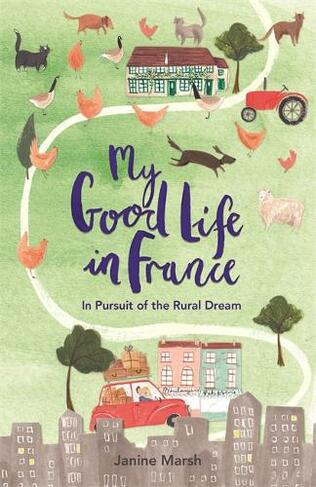 My Good Life in France: In Pursuit of the Rural Dream

By Janine Marsh (Author)
Paperback
£8.19 rrp £9.99 Save £1.80 (18%)
GBP
Availability
In Stock
Free Delivery Available When You Spend £15 Or More
Details
Spend £15 On Products To Receive Free Standard Delivery To Your Home Or Free Next Day Click and Collect To Stores
Share

One grey dismal day, Janine Marsh was on a trip to northern France to pick up some cheap wine. She returned to England a few hours later having put in an offer on a rundown old barn in the rural Seven Valleys area of Pas de Calais. This was not something she'd expected or planned for. Janine eventually gave up her job in London to move with her husband to live the good life in France. Or so she hoped. While getting to grips with the locals and la vie Francaise, and renovating her dilapidated new house, a building lacking the comforts of mains drainage, heating or proper rooms, and with little money and less of a clue, she started to realize there was lot more to her new home than she could ever have imagined. These are the true tales of Janine's rollercoaster ride through a different culture - one that, to a Brit from the city, was in turns surprising, charming and not the least bit baffling.

Janine Marsh lives in northern France with her husband and myriad pets. She is unable to resist a stray animal, and the word is out. She works from a converted pig sty when she's not travelling around France doing research for her website www.thegoodlifefrance.com, which tells you everything you need to know about France and more.She gave up a sensible job in London, where she was born, to renovate a bargain basement barn and turn it into a home - an ongoing project. Along the way she became maid to six cats, three dogs, fifty chickens and ducks, and four mad geese.She is an award-winning travel writer and social media fan who loves to share her life, explorations and photos on Facebook at The Good Life France.