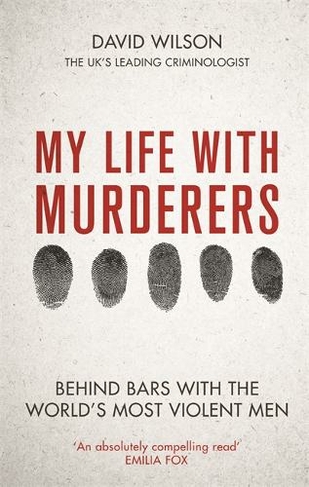 My Life with Murderers: Behind Bars with the World's Most Violent Men

By David Wilson (Author)
Hardback
https://www.whsmith.co.uk/products/my-life-with-murderers-behind-bars-with-the-worlds-most-violent-men/david-wilson/hardback/9780751574142-12-000.html £16.00 rrp £20.00 Save £4.00 (20%)
GBP
Availability
In Stock
With Free Standard Delivery To Your Home Or Store
Details
Spend £15 On Eligible Products To Recieve Free Standard Delivery To You Home Or Free Next Working Day Click And Collect To Store
Share

'Hugely insightful and thought provoking . . . I read it from cover to cover in one go' - Emilia Fox 'With characteristic brilliance and admirable sensitivity, Wilson illuminates the complex causes of their often horrific crimes' - Professor Simon Winlow, Vice President of the British Society of Criminology Professor David Wilson has spent his professional life working with violent men - especially men who have committed murder. Aged twenty-nine he became, at that time, the UK's youngest ever prison Governor in charge of a jail and his career since then has seen him sat across a table with all sorts of killers: sometimes in a tense interview; sometimes sharing a cup of tea (or something a little stronger); sometimes looking them in the eye to tell them that they are a psychopath. Some of these men became David's friends; others would still love to kill him. My Life with Murderers tells the story of David's journey from idealistic prison governor to expert criminologist and professor. With experience unlike any other, David's story is a fascinating and compelling study of human nature.

David Wilson is Emeritus Professor of Criminology and the founding Director of the Centre for Applied Criminology at Birmingham City University. Prior to taking up an academic appointment in 1997, David was a Prison Governor and at 29 became the youngest governing governor in England. He worked at Grendon, Wormwood Scrubs and at Woodhill in Milton Keynes - where he helped to design and then ran the two units for the 12 most violent prisoners in the country, which brought him into contact with many recent serial killers. David regularly appears in the print and broadcast media as a commentator and presenter. His most recent documentary was the critically acclaimed Interview with a Murderer for Channel 4 in June 2016. In 2017 the documentary won the Broadcast Award and the Royal Television Society Award. Professor Wilson regularly gives public, school and university lectures. He is currently filming for the BBC and Channel 4.