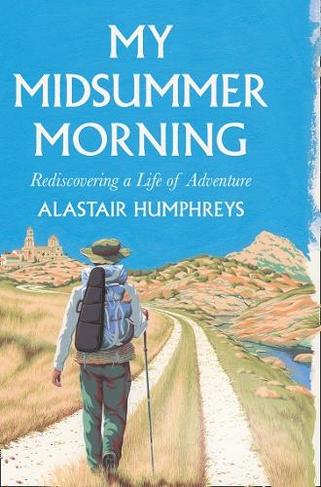 My Midsummer Morning: Rediscovering a Life of Adventure

By Alastair Humphreys (Author)
Hardback
https://www.whsmith.co.uk/products/my-midsummer-morning-rediscovering-a-life-of-adventure/alastair-humphreys/hardback/9780008331825-12-000.html £11.99 rrp £14.99 Save £3.00 (20%)
GBP
Availability
In Stock
Free Delivery Available When You Spend £25 Or More
Details
Spend £25 On Products To Receive Free Standard Delivery To Your Home Or Free Next Working Day Click And Collect To Store
Share

A Financial Times Summer Book of 2019 Seasoned adventurer Alastair Humphreys pushes himself to his very limits - busking his way across Spain with a violin he can barely play. In 1935 a young Englishman named Laurie Lee arrived in Spain. He had never been overseas; had hardly even left the quiet village he grew up in. His idea was to walk through the country, earning money for food by playing his violin in bars and plazas. Nearly a century later, the book Laurie Lee wrote - As I Walked Out One Midsummer Morning - inspired Alastair Humphreys. It made him fall in love with Spain - the landscapes and the spirit - and with Laurie's style of travel. He travelled slow, lived simply, slept on hilltops, relished spontaneity, and loved conversations with the different people he met along the hot and dusty road. For 15 years, Alastair dreamed of retracing Laurie Lee's footsteps, but could never get past the hurdle of being distinctly unmusical. This year, he decided to go anyway. The journey was his most terrifying yet, risking failure and humiliation every day, and finding himself truly vulnerable to the rhythms of the road and of his own life. But along the way, he found humility, redemption and triumph. It was a very good adventure.

Alastair Humphreys is an adventurer, author, speaker, and film maker. While at university, he cycled from Pakistan to China, Land's End to John O'Groats, Turkey to Italy, Mexico to Panama and across South America. Since then, he has cycled all the way around the world, raced a yacht across the Atlantic Ocean, canoed 500 miles down the Yukon River, rowed across the Atlantic Ocean and walked the length of the holy Kaveri river in India. In 2011 Alastair decided to remain in the UK and encourage people to seek out adventure and wilderness closer to home, challenging themselves through microadventures.He was chosen as one of National Geographic's Adventurers of the Year in 2012. Alastair lives in a village outside London with his wife and two young children (hence the microadventures!)