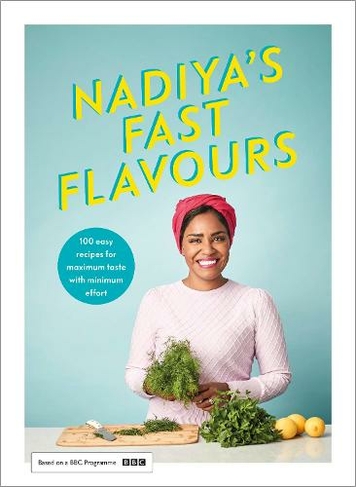 Famous for reinventing classic meals with surprising ingredient combinations and creative recipes, Nadiya Hussain is back with her brand new book that accompanies the BB" series Nadiya's Fast Flavours. Bringing excitement back in to daily meals at home, with recipes that she showcases on the programme and many more, Nadiya takes regular recipes to the next level with her usual trademark flair. Hitting every taste bud with her wonderfully pungent flavours, the recipes in Nadiya's Fast Flavours provide you with clever shortcuts, tips and ingredients that will put the wow into your food without spending hours in the kitchen.

Perfect for busy individuals and families that want to add an extra something to their daily meals. Pre-order your copy of the Nadiya's Fast Flavours today!

Nadiya Hussain was the winner of 2015's Great British Bake Off in a finale watched by over 13 million viewers, and she has since become a national treasure. Nadiya has presented several of her own BBC2 cookery series to great acclaim, with episodes reaching on average 1.9 million viewers each week. Her series have also been shown internationally on Netflix and her cookbooks published into the USA, Germany and the Netherlands.Nadiya's other projects have included several standalone travelogue TV programmes, a series of childrens books, a reporting role for The One Show, a range of cookware and partnerships with major brands. Nadiya writes a regular column for The Times and has become recognised as a commentator on mental health after opening up about her own struggles with anxiety. Born in Luton to British Bangladeshi parents, Nadiya now lives in Milton Keynes with her husband, Abdal, and their three teenage children. She was recently awarded an MBE for services to broadcasting and the culinary arts. Her previous cookery titles include Nadiya's Kitchen, Nadiya's British Food Adventure, Nadiya's Family Favourites, Time to Eat and Nadiya Bakes.