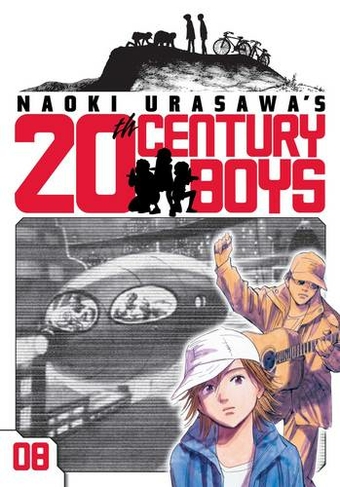 This is the story of a group of boys who try to save the world!; As boys, Kenji and his friends came up with a bunch of stories about an evil organization bent on world destruction. As adults, someone is now turning their fantasies into reality! What really happened on Bloody New Year's Eve? Kenji, Otcho and Maruo have just driven their dynamite-loaded truck under the robot...where they see what a poor relation to the giant robot they dreamed up in their childhoods it actually is: just two legs with caterpillar treads, held together by an enormous hot air balloon, with cloth hanging down to disguise the underside. Meanwhile, at the meeting of the government's crisis control committee, Manjome Inshu unveils the Friend's benevolent plan to distribute worldwide a vaccine against the virus being spread by the robot. The Friends, he says, have been developing such a vaccine since the terrorist germ attacks of 1997. At the same time, the Friends will contribute a monument they were building for their headquarters to serve as a blockade against the robot. The Friends are saving the day! Or are they? EU Toy Safety Directive - No warning

Born in Tokyo in 1960, Naoki Urasawa's career as a manga artist spans three decades and has firmly established him as one of the true manga masters of his generation. A graduate of Meisei University, Urasawa debuted with Return! in 1981 and hasn't stopped his impressive output since. Well-versed in a variety of genres, Urasawa's oeuvre encompasses a multitude of different subjects, such as romantic comedies (Yawara! A Fashionable Judo Girl), gritty urban dramas (Pineapple ARMY), swashbuckling detective stories (Master Keaton), captivating psychological thrillers (Monster and 20th Century Boys) and modern reinterpretations of the work of the God of Manga, Osamu Tezuka (Pluto: Urasawa x Tezuka). Many of his books have spawned equally popular animated series, and 2008 saw the theatrical release of the first of three live-action Japanese films based on 20th Century Boys.No stranger to accolades and awards, Urasawa has received the Kodansha Manga Award, and is a three-time recipient of the prestigious Shogakukan Manga Award and a two-time recipient of the Osamu Tezuka Cultural Prize.Similarly, Monster has been nominated twice for the Eisner Award in America. Urasawa has also become involved in the world of academia, and in 2008 accepted a guest teaching post at Nagoya Zokei University, where he teaches courses in, of course, manga. Combining a breathtaking cinematic visual style with stories known for their penetrating psychological depth and maturity, Naoki Urasawa remains one of the most exciting creators working in the medium of comics today.