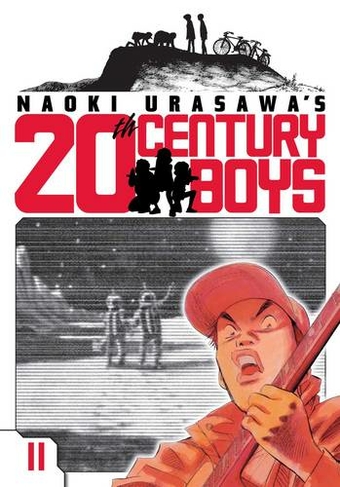 Is the Friend really Kanna's father?! Will she still be able to stand up and fight, despite this anguishing news? Meanwhile, Koizumi Kyoko and Sadakiyo have gotten away from the Dream Navigators by the skin of their teeth, but as Yoshitsune once warned, these people will chase you to the ends of the earth... With Kanna in shock over the truth of her paternity, will she have the strength to go and rescue Koizumi? Also, back in the summer of 2002, Mon-chan succeeded in tracking down Sadakiyo and got him to commit to paper the truth about the Friend's identity and his actions. But to prove his loyalty to his trusted Friend, Sadakiyo took measures to ensure that the 'Mon-chan Memo' stayed hidden. What exactly was 'the Lie of 1970' and how far will the Dream Navigators go to prevent it from being revealed? EU Toy Safety Directive - No warning

Naoki Urasawa's career as a manga artist spans more than twenty years and has firmly established him as one of the true manga masters of Japan. Born in Tokyo in 1960, Urasawa debuted with BETA! in 1983 and hasn't stopped his impressive output since. Well-versed in a variety of genres, Urasawa's oeuvre encompasses a multitude of different subjects, such as a romantic comedy (Yawara! A Fashionable Judo Girl), a suspenseful human drama about a former mercenary (Pineapple ARMY; story by Kazuya Kudo), a captivating psychological suspense story (Monster), a sci-fi adventure manga (20th Century Boys), and a modern reinterpretation of the work of the God of Manga, Osamu Tezuka (Pluto: Urasawa x Tezuka; co-authored with Takashi Nagasaki, supervised by Macoto Tezka, and with the cooperation of Tezuka Productions). Many of his books have spawned popular animated and live-action TV programs and films, and 2008 saw the theatrical release of the first of three live-action Japanese films based on 20th Century Boys. No stranger to accolades and awards, Urasawa is a three-time recipient of the prestigious Shogakukan Manga Award, a two-time recipient of the Osamu Tezuka Cultural Prize, and has received the Kodansha Manga Award. Similarly, Monster has been nominated three times for the Eisner Award in America. Urasawa has also become involved in the world of academia, and in 2008 accepted a guest teaching post at Nagoya Zokei University, where he teaches courses in, of course, manga.