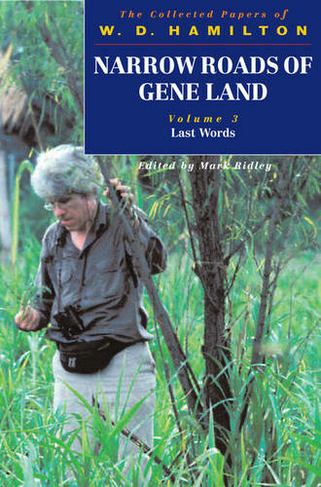 W. D. Hamilton (1936-2000) has been described by Richard Dawkins as 'a good candidate for the title of most distinguished Darwinian since Darwin'. His work on evolutionary biology continues to influence scientists working across a wide variety of disciplines, including evolution, population genetics, animal behaviour, genetics, anthropology, and ecology. This third and final volume of Narrow Roads of Gene Land contains Hamilton's key papers published between 1990 and 2000, a period in which he covered a great diversity of topics, often in collaboration with other scientists. Many of the papers in this volume continue his work on sex, and particularly its relation to parasitic disease, but other topics covered include the Gaia theory, the colours of autumn leaves, and the still-controversial hypothesis that the AIDS pandemic accidentally originated in a polio vaccination campaign in Africa. Each of the co-authored papers in this volume is preceded by an introduction written by one of Hamilton's co-authors, following the model of the previous two volumes in this series, which brings the reader closer to Hamilton's extraordinary personality and intellect, providing the intellectual and physical contexts within which each piece of research was developed. Also included are a chapter by Jeremy Leighton John on the Hamilton archive - 'Bill's last great work' - complete with irresistible pictures, and Alan Grafen's biographical memoir, which presents an overview of Bill's life and work. Together, this unique collection of papers with their biographical introductions provides a profound portrait of one of the twentieth century's most innovative scientists. Numerous halftones, tables and line drawings