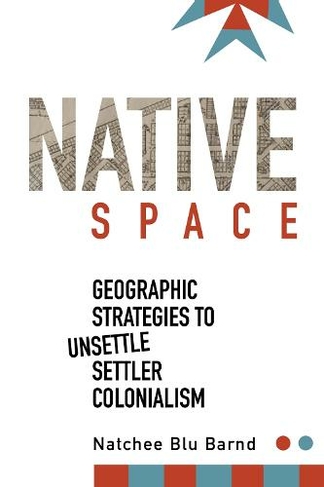 Native Space explores how indigenous communities and individuals sustain and create geographies through place-naming, everyday cultural practices, and artistic activism, within the boundaries of the settler colonial nation of the United States. Diverging from scholarship that tends to treat indigenous geography as an analytical concept, Natchee Blu Barnd instead draws attention to the subtle manifestations of everyday cultural practices-the concrete and often mundane activities involved in the creation of indigenous space. What are the limits and potentials of indigenous acts of spatial production? Native Space argues that control over the notion of "Indianness" still sits at the center of how space is produced in a neocolonial nation, and shows how non-indigenous communities uniquely deploy Native identities in the direct construction of colonial geographies. In short, "the Indian" serves to create White space in concrete ways. Yet, Native geographies effectively reclaim indigenous identities, assert ongoing relations to the land, and refuse the claims of settler colonialism. Barnd creatively and persuasively uses original cartographic research and demographic data, a series of interrelated stories set in the Midwestern Plains states of Kansas and Oklahoma, an examination of visual art by contemporary indigenous artists, and discussions of several forms of indigenous activism to support his argument. With its highly original, interdisciplinary approach, Native Space makes a significant contribution to the literature in cultural and critical geography, comparative ethnic studies, indigenous studies, cultural studies, American Studies, and related fields. 8 page colour insert