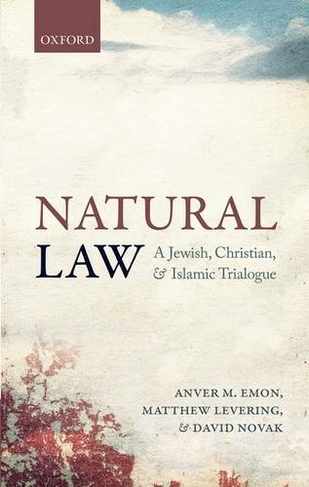 This book is an examination of natural law doctrine, rooted in the classical writings of our respective three traditions: Jewish, Christian, and Islamic. Each of the authors provides an extensive essay reflecting on natural law doctrine in his tradition. Each of the authors also provides a thoughtful response to the essays of the other two authors. Readers will gain a sense for how natural law (or cognate terms) resonated with classical thinkers such as Maimonides, Origen, Augustine, al-Ghazali and numerous others. Readers will also be instructed in how the authors think that these sources can be mined for constructive reflection on natural law today. A key theme in each essay is how the particularity of the respective religious tradition is squared with the evident universality of natural law claims. The authors also explore how natural law doctrine functions in particular traditions for reflection upon the religious other.

Anver M. Emon is Professor of Law, University of Toronto Faculty of Law, where he teaches and researches in the areas of Islamic law and legal theory, statutory interpretation, and Common Law Torts. He is an internationally recognized scholar of Islamic law, having published widely in the field. He is the editor in chief of Middle East Law and Governance, a peer reviewed journal, and a general editor of the Oxford Islamic Legal Studies Series. In addition to hisacademic work, he regularly consults with government agencies and NGOs on issues of law, governance, and development in legally pluralist countries. Matthew Levering has recently been appointed to a newly formed chair at Mundelein Seminary. Before coming to Mundelein, he taught at the University of Dayton and Ave Maria University. He is the author or editor of more than thirty books in the fields of Catholic theology and Aquinas studies including Biblical Natural Law.David Novak holds the J. Richard and Dorothy Shiff Chair in Jewish Studies as Professor of Religion and Philosophy, University of Toronto, since 1997. He is a Fellow of the Royal Society of Canada and of the American Academy for Jewish Research. He has taught at the University of Virginia, City University of New York, and Jewish Theological Seminary of America. He is the author of sixteen books and has served as a consultant to the governments of Canada, the United States, Israel, and Poland.