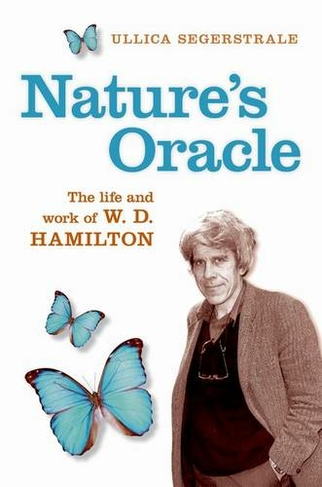 Nature's Oracle The Life and Work of W.D.Hamilton

Also available on eBook for £14.51. Click here to purchase from Rakuten Kobo

W.D.Hamilton (1936-2000) was responsible for a revolution in thinking about evolutionary biology - a revolution that changed our understanding of life itself. He played a central role in the realization that what matters in evolution is not the survival of the individual but of the survival of its genes. This provided the solution to the long standing problem of animal altruism that vexed even Darwin himself, and in due course resulted in terms like selfish genes, kin selection, and sociobiology becoming familiar to a wider public. Hamilton went on to solve many more major problems, and open up ever new fields - he shaped much of our current understanding of central problems including the evolution of sexual reproduction and ageing. He became world famous and garnered international prizes. But this is all in hindsight. In fact, Hamilton's recognition came late - his career is a classic case of misunderstood genius. In this illuminating and moving biography Ullica Segerstrale documents Hamilton's extraordinary life and work, revealing a man of immense intellectual curiosity, an uncompromising truth-seeker, a naturalist and jungle explorer, a risk-taker, an unconventional scientist with a poet's soul and a deep concern for life on earth and mankind's future. 20 B&W

Ullica Segerstrale is Professor of Sociology at Illinois Institute of Technology in Chicago and director of its Camras Scholars Program.She holds a PhD in sociology from Harvard, a MA in communication from the University of Pennsylvania, and MS degrees in both organic chemistry and sociology from the University of Helsinki. She has held Guggenheim and Fulbright fellowships, and been supported by the American Philosophical Society, the Rockefeller Foundation and the Sloan Foundation, among others. She is a member of the European Academy of Sciences and Arts, and the Finnish Academy of Sciences and Letters. Segerstrale has written and lectured widely internationally on science and values, the ethics of research, and the debates about what it means to be human. Her books include Defenders of the Truth: The battle for science in the sociobiology debate and beyond, and Beyond the Science Wars: The missing discourse about science and society.