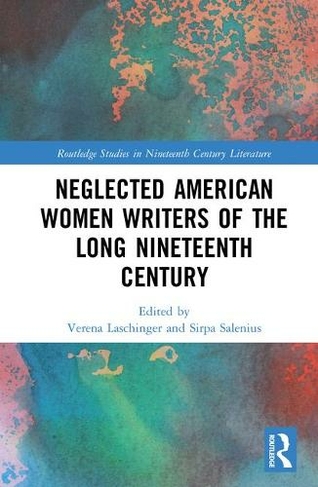 Also available on eBook for £38.27. Click here to purchase from Rakuten Kobo

Neglected American Women Writers of the Long Nineteenth Century, edited by Verena Laschinger and Sirpa Salenius, is a collection of essays that offer a fresh perspective and original analyses of texts by American women writers of the long nineteenth century. The essays, which are written both by European and American scholars, discuss fiction by marginalized authors including Yolanda DuBois (African American fairy tales), Laura E. Richards (children's literature), Metta Fuller Victor (dime novels/ detective fiction), and other pioneering writers of science fiction, gothic tales, and life narratives. The works covered by this collection represent the rough and ragged realities that women and girls in the nineteenth century experienced; the writings focus on their education, family life, on girls as victims of class prejudice as well as sexual and racial violence, but they also portray girls and women as empowering agents, survivors, and leaders. They do so with a high-voltage creative charge. As progressive pioneers, who forayed into unknown literary terrain and experimented with a variety of genres, the neglected American women writers introduced in this collection themselves emerge as role models whose innovative contribution to nineteenth-century literature the essays celebrate.

Verena Laschinger teaches American Literature at the University of Erfurt, Germany. From 2005 to 2010 she was employed as Assistant Professor of American Literature and Culture at Fatih University Istanbul, Turkey. She holds a Ph.D. from Ludwig-Maximilians-University Munich, Germany, and participated in the 1997 School of Criticism and Theory at Cornell University, Ithaca, USA. Her research interests include Turkish-American literature and American urban literature and photography. She is also a founding member of the European Study Group of Nineteenth-Century American Literature. Sirpa Salenius, Ph.D., is Senior Lecturer in English-language literature and culture at the University of Eastern Finland. Previously she worked as Project Assistant Professor at the University of Tokyo and taught at American university study abroad programs in Rome and Florence. Her conference presentations, lectures, and publications focus on Transatlantic Studies; her more recent work looks at race, gender, and sexuality. Her books include An Abolitionist Abroad: Sarah Parker Remond in Cosmopolitan Europe (University of Massachusetts Press, 2016), Rose Elizabeth Cleveland: First Lady and Literary Scholar (Palgrave Macmillan, 2014), and essay collections: Race and Transatlantic Identities (Routledge, 2017), co-edited with Elizabeth T. Kenney and Whitney Womack Smith, and Transatlantic Conversations: Nineteenth-Century American Women's Encounters with Italy and the Atlantic World (University of New Hampshire Press, 2016), co-edited with Beth L. Lueck, and Nancy Lusignan Schultz.