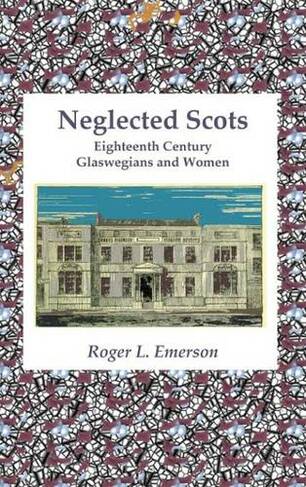 The Scottish Enlightenment is often perceived as an Edinburgh phenomenon, centred on moral-political-economic questions and on the philosophical and historical interests of David Hume and his friends among the polite literati. In this new collection, the focus is squarely on eighteenth-century Glasgow, a thriving trading and industrial centre with a fine University, and on Women. The Glasgow sections look at three groups of men - the city's early virtuosi; members of the Glasgow Literary Society; and a largely neglected group of practical-minded Evangelicals, Professor John Anderson among them. The section on Scottish women of the century aims not simply to portray 'notable and accomplished' individuals, but to examine how women figured in and related to the Scottish Enlightenment as seen both as an historic period and in the context of the development of Scottish thought. There is an extensive bibliography, plus notes and indexes.

Roger L. Emerson spent most of his career at the University of Western Ontario where he taught European and British social and intellectual history and is now an emeritus professor. An Associate Editor of the 'Oxford Encyclopaedia of the Enlightenment' (2002) he is also the author of: 'Professors, Patronage and Politics: The Aberdeen Universities in the Eighteenth Century' (1992); 'Academic Patronage in the Scottish Enlightenment: Glasgow, Edinburgh and St AndrewsUniversities' (2008); and 'Essays on David Hume, Medical Men and the Scottish Enlightenment: 'Industry, Knowledge and Humanity' ' (2009). His 2013 publication, 'An Enlightened Duke, the Life of Archibald Campbell (1682-1761), Earl of Ilay, 3rd Duke of Argyll', won The Saltire Society's 'Scottish History Book of the Year Award' in 2013.