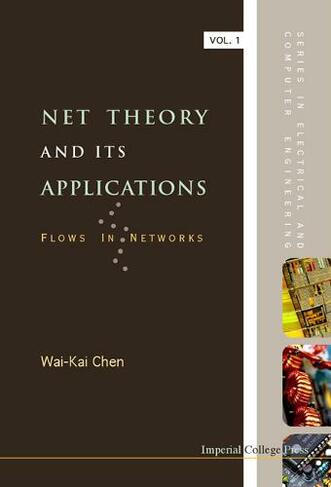 Net Theory And Its Applications: Flows In Networks 1

Electrical, communication, transportation, computer, and neural networks are special kinds of nets. Designing these networks demands sophisticated mathematical models for their analysis. This book is the first to present a unified, comprehensive, and up-to-date treatment of net theory. It brings together elements of abstract graph theory and circuit analysis to network problems.

WAI-KAI CHEN is Professor and Head Emeritus of EECS Department, University of Illinois at Chicago. Currently, he is the Vice President of International Technological University. He received his BS and MS from Ohio University, where he became a Distinguished Professor, and PhD from the University of Illinois at Urbana-Champaign. Professor Chen was Editor of the IEEE Transactions on Circuits and Systems, President of IEEE Circuits and Systems Society and is Founding Editor of Journal of Circuits, Systems and Computers. He received the Lester R Ford Award, Alexander von Humboldt Award, JSPS Fellowship, Ohio University Distinguished Alumni Medal, Senior University Scholar, UIUC Distinguished Alumnus Award, IEEE CAS Golden Jubilee Medal, IEEE CAS Education and Meritorious Service Awards and IEEE Third Millennium Medal. A fellow of IEEE and AAAS, he is known for his Applied Graph Theory, Theory and Design of Broadband Matching Networks, Active Network and Feedback Amplifier Theory, Passive and Active Filters, and The VLSI Handbook.