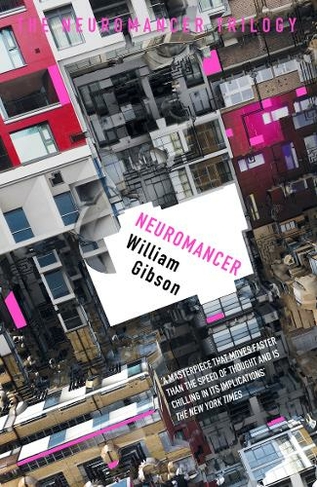 By William Gibson (Author)
Paperback
£7.37 rrp £8.99 Save £1.62 (18%)
GBP
Availability
In Stock
Free Delivery Available When You Spend £25 Or More
Details
Spend £25 On Products To Receive Free Standard Delivery To Your Home

The book that defined the cyberpunk movement, inspiring everything from The Matrix to Cyberpunk 2077. The sky above the port was the colour of television, tuned to a dead channel. William Gibson revolutionised science fiction in his 1984 debut Neuromancer. The writer who gave us the matrix and coined the term 'cyberspace' produced a first novel that won the Hugo, Nebula and Philip K. Dick Awards, and lit the fuse on the Cyberpunk movement. More than three decades later, Gibson's text is as stylish as ever, his noir narrative still glitters like chrome in the shadows and his depictions of the rise and abuse of corporate power look more prescient every day. Part thriller, part warning, Neuromancer is a timeless classic of modern SF and one of the 20th century's most potent and compelling visions of the future.

William Gibson was born in South Carolina in 1948. Educated in the USA, he emigrated to Canada in 1968 and retains dual nationality. Gibson began writing in 1977 and burst upon the literary world with his acclaimed first novel, NEUROMANCER, the book that launched the cyberpunk generation, and the first novel to win the holy trinity of science fiction, the Hugo, Nebula and Philip K. Dick Awards. Although best known for his early cyberpunk novels, Gibson's work has continued to evolve over the ensuing years, always casting an astute critical eye on modern societal trends. In 1999 The Guardian praised him as 'probably the most important novelist of the past two decades'. His most recent books include ZERO HISTORY and THE PERIPHERAL.William Gibson's website is www.williamgibsonbooks.com and you can follow him on Twitter at @greatdismal