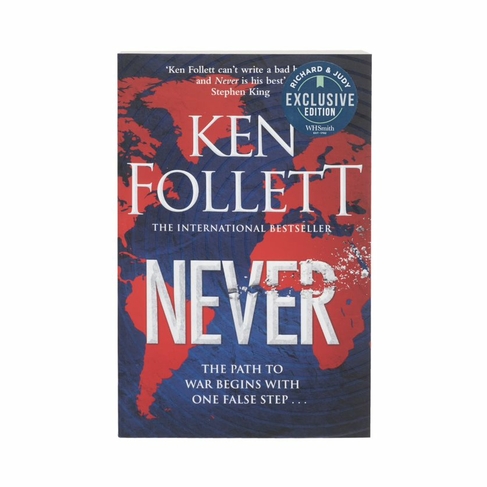 International number one bestseller Ken Follett's new book, Never is more than just a thriller, it touches on a scenario that is close to the bone and one that we all hope never comes true.

A complex web ensues as a US army drone is stolen and what starts as a terrible mistake, snowballs into a cataclysmic event. Meanwhile, the country of Chad is at the heart of a political situation involving two intelligence agents who are seeking to rid the region of a ruthless terrorist group and China is keeping its eye on what has been going on, including a senior government official who hopes to climb the ranks of the Communist Party, leaving the old wing in his dust.

As China is left feeling vulnerable by the situation in Chad retaliation talks against America begins with North Korea which is more than happy to be part of the action.

All eyes are on the American president as the two superpowers jostle and use their proxies to lay the groundwork for what could be a third and cataclysmic world war. Events domino and the blowback gets more and more troubling, leaving both sides unwilling to back down. It?s time to test resolve, diplomacy, and nuclear arsenals, but who will blink first and become the ultimate aggressor?

This book will have you up till 2am wondering where the hours went! A gasp-out-loud kind of read, not to be missed!

Exclusive content inside! In this book, you will find:

Buy the Richard & Judy Summer 2022 Book Club Bundle to get all six books at our best price.

Ken Follett was born in Cardiff, Wales. Barred from watching films and television by his parents, he developed an early interest in reading thanks to a local library. After studying philosophy at University College London, he became involved in centre-left politics, entering into journalism soon after. His first thriller, the wartime spy drama Eye of the Needle, became an international bestseller and has sold over 10 million copies. He then astonished everyone with his first historical novel, The Pillars of the Earth, the story of the building of a medieval cathedral, which went on to become one of the most beloved books of the twentieth century. Now he springs another surprise with Never. One of the most popular authors in the world, his many books, including the Kingsbridge series and the Century trilogy, have sold more than 178 million copies. A father and husband, Ken lives with his wife in England and enjoys travelling the world when he can.