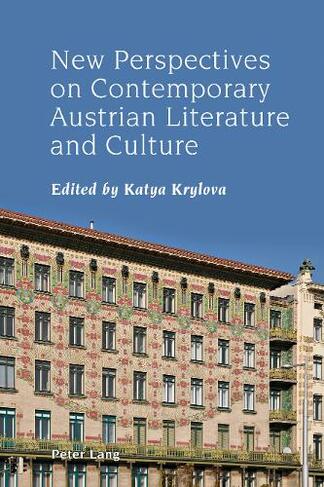 This volume brings together contributions arising from papers originally presented at the Contemporary Austrian Literature, Film and Culture International Conference held at the University of Nottingham in April 2015. It examines trends in contemporary Austrian literature, film and culture, predominantly over the past thirty years. This period has been one of great transformation in Austrian society, with the Waldheim affair of 1986-1988 marking the beginning of a belated process of confronting the country's National Socialist past. The sixteen chapters of the volume analyse literary texts, films, memorial projects and Austria's musical heritage, considering works by cultural practitioners operating both within and outside of Austria. The collection offers a multi-perspectival view on how contemporary Austria sees itself and how it is, in turn, seen by others from various vantage points. 2 Illustrations, unspecified

Katya Krylova is a Lecturer in German, Film and Visual Culture at the University of Aberdeen. She studied German and Italian at Churchill College, Cambridge, where she then completed an MPhil in European Literature and Culture and a PhD in German Literature in 2011. She has also held research and teaching positions at the Ludwig Boltzmann Institute for the History and Theory of Biography in Vienna, in the Department of German Studies at the University of Nottingham (where she held a Leverhulme Early Career Fellowship), in the Department of German at King's College London, and in the Department of Modern Languages at the University of Birmingham. Her first monograph, Walking Through History: Topography and Identity in the Works of Ingeborg Bachmann and Thomas Bernhard (2013), was the winner of the 2011 Peter Lang Young Scholars Competition in German Studies. Her most recent monograph, The Long Shadow of the Past: Contemporary Austrian Literature, Film, and Culture, was published in 2017.