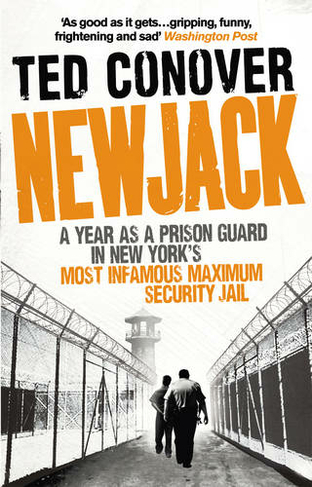 Newjack: A Year as a Prison Guard in New York's Most Infamous Maximum Security Jail

After he was denied access to report on Sing Sing, one of America's most notorious high security jails, journalist Ted Conover applied to become a prison guard. As a rookie officer, or 'newjack', Conover spent a year in the unpredictable, intimidating and often violent world of America's penal system. Unarmed and outnumbered, prison officers at one of America's toughest maximum security jails supervise 1,800 inmates, most of whom have been convicted of violent felonies: murder, manslaughter, rape. Prisoners conceal makeshift weapons to settle gang rivalries or old grudges, and officers are often attacked or caught in the crossfire. When violence flares up in the galleries or yard an officer's day can go from mundane to terrifying in a heartbeat. Conover is an acclaimed journalist, known for immersing himself completely in a situation in order to write about it. With remarkable insight, Newjack takes the reader as close to experiencing life in an American prison as any of us would ever want to get. It's a thrillingly told account of how the gruelling world of the prison system brutalizes all who enter it - prison guards and prisoners alike.

Ted Conover is a writer best known for his participatory investigations: riding the rails with tramps, traveling with the Mexican undocumented, and working at Sing Sing prison. Two of his previous books, Whiteout and Coyotes, were named Notable Books of the Year by The New York Times. His writing has appeared in The New Yorker, The New York Times Magazine, The Guardian, and many other publications. He teaches at the Arthur L. Carter Journalism Institute of New York University. Further information can be found at www.tedconover.com.