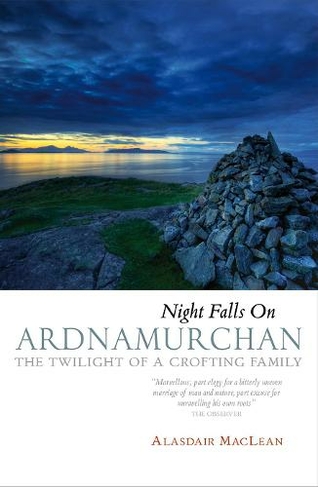 Night Falls on Ardnamurchan: The Twilight of a Crofting Family (New edition)

SINCE ITS FIRST PUBLICATION in 1984, Night Falls in Ardnamurchan has become a classic account of the life and death of a Highland community. The author weaves his own humorous and perceptive account of crofting with extracts from his father's journal - a terse, factual and down to earth vision of the day-to-day tasks of crofting life. It is an unusual and memorable story that also illuminates the shifting, often tortuous relationships between children and their parents. Alasdair Maclean reveals his own struggle to come to terms with his background and the isolated community he left so often and to which he returned again and again. In this isolated community is seen a microcosm of something central to Scottish identity - the need to escape against the tug of home. Illustrations, black and white

BORN IN GLASGOW of Highland stock, Alasdair Maclean left school at fourteen to work in the Clydeside shipyards. National Service in the Merchant Marine followed and then service in the British and Indian Armies. He returned to Scotland to read English at Edinburgh University before returning home to Sanna in Ardnamurchan. A poet of some repute, this is his only book of non fiction.