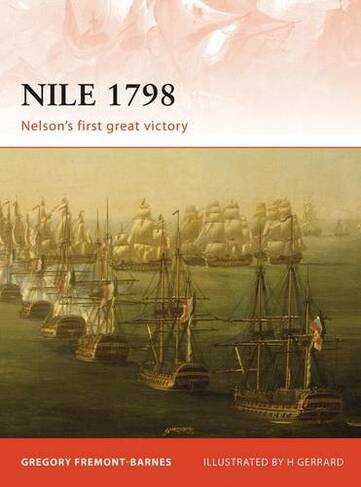 By Gregory Fremont-Barnes (Author), Howard Gerrard (Illustrator)
Paperback
https://www.whsmith.co.uk/products/nile-1798-nelsons-first-great-victory-campaign-230/gregory-fremontbarnes/howard-gerrard/paperback/9781846035807-01-000.html £13.79 rrp £15.99 Save £2.20 (13%)
GBP
Availability
Currently unavailable. We don't know when or if this item will be back in stock
Share

On the night of 1 August 1798 a British fleet under the command of Rear-Admiral Horatio Nelson met a French fleet under the command of Admiral Francois-Paul Brueys D'Aigalliers. By morning the British had won a near-complete victory: only two of the 13 French ships-of-the-line escaped and the rest were either captured or destroyed. It was the first major independent victory of Nelson's career but more importantly it crippled the French effort in Africa by denying them access to the suplies and support from the sea. This book uses the latest research, new maps and specially commissioned artwork to tell the story of one of the great sea battles of the Napoleonic era. 50 b/w; 42 col

Gregory Fremont-Barnes holds a doctorate in Modern History from the University of Oxford and serves as a Senior Lecturer in the Department of War Studies at the Royal Military Academy, Sandhurst. A prolific author, his books include Waterloo 1815: The British Army's Day of Destiny and many others on military and naval subjects covering the 18th to the 21st centuries. Holding a particular interest in insurgency and counterinsurgency, his wider work for the UK Ministry of Defence on these subjects regularly takes him to Africa, the Middle East and South America. As an academic advisor, Dr Fremont-Barnes has accompanied many groups of British Army officers and senior NCOs in their visits to numerous battlefields of the Peninsular War, the Waterloo campaign, Normandy and the Falklands.Howard Gerrard studied at the Wallasey School of Art and has been a freelance designer and illustrator for over 20 years. He has worked for a number of publishers and is an associate member of the Guild of Aviation Artists. He has won both the Society of British Aerospace Companies Award and the Wilkinson Sword Trophy and has illustrated a number of books for Osprey