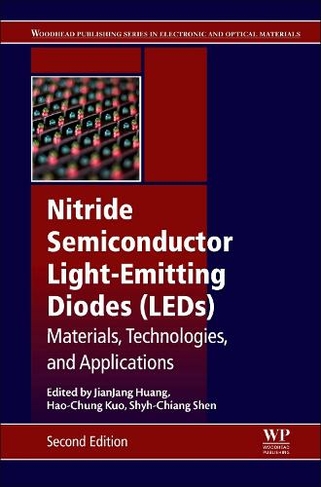 Also available on eBook for £265.19. Click here to purchase from Rakuten Kobo

Prof. JianJang Huang received the B.S. degree in Electrical Engineering (EE) and the M.S. degree in Graduate Institute of Photonics and Optoelectronics (GIPO) from National Taiwan University (NTU), Taipei, Taiwan, in 1994 and 1996, respectively, and the Ph.D. degree in Electrical Engineering from the University of Illinois, Urbana-Champaign, in 2002. He had worked with WJ (Watkins Johnson) Communications in California, as a Staff Scientist from 2002 to 2004. He then came back to Taiwan in 2004 and is currently the professor at NTU EE and GIPO.Prof. Huang has been involved in the development of optoelectronic and electronic devices. He has developed a spin-coating method for nanosphere lithography (NSL) to significantly improve the performance of light emitting diodes (LEDs), solar cells and nanorod devices. His NSL approach has been licensed to several LED companies in Taiwan. He has also fabricated and characterized IGZO TFTs and the corresponding circuits on glass and flexible substrates. In recent years, his group has spent great efforts in realizing cancer cell probes using ZnO nanorods, and high-sensitivity protein sensors based on IGZO TFTs.Prof. Huang is a member of the Phi Tau Phi Scholastic Honor Society. He received "Wu Da-Yu" award in 2008, the most prestigious one for young researchers in Taiwan sponsored by National Science Council. And in the same year, he received the award for the most excellent young electrical engineer from the Chinese Institute of Electrical Engineering. He has served in several IPO committees in Taiwan Stock Exchange. He is currently the board director of GCS holdings in Torrance, CA, USA and the conference chair of SPIE, International Conference on Solid-State Lighting. Professor H. C. Kuo received the B.S. degree in Physics from National Taiwan University, Taiwan the M.S. degree in Electrical and computer engineering from Rutgers University in 1995, and the Ph.D. from Center of Compound Semiconductor Microelectronics (CCSM) of University of Illinois- Urbana Champaign in 1998. He has an extensive professional career both in research and industrial research institutions that includes: Research Consultant in Lucent Technologies, Bell Lab (1995-97); Member of Technical Staff in Fiber-optics Division at Agilent Technologies, USA (1999-2001) and Manager of LuxNet Corporation, USA (2001-2002). Since October, 2002 he joined National Chiao Tung University as a faculty member of Institute of Electro-Optical Engineering. Professor Kuo is a member of the IEEE and a recipient of Yang faculty Award from the Foundation for the Advancement of Outstanding Scholarship, he was author and co-author of 70 SCI journal papers and 80 international conference papers. Shyh-Chiang Shen received his B.S. and M.S. degrees, both in electrical engineering, from National Taiwan University in 1993 and 1995, respectively. He received his Ph.D. degree in electrical engineering at the University of Illinois at Urbana-Champaign (UIUC) in 2001. During his graduate study at the University of Illinois, he was involved in the development of low-voltage RF MEMS switches and ion-implanted GaAs MESFET using e-beam direct gate-writing photolithography techniques.Dr. Shen joined Xindium Technologies, Inc. as a senior processing engineer in June 2001. He developed a proprietary high-performance InP SHBT technology for 40Gb/s OEIC applications and InP-based power HBT technology for wireless communications. In August 2004, he joined the HSIC group at the University of Illinois as a postdoctoral research associate to work on exciting research projects. In January 2005, he joined the Georgia Institute of Technology as an Assistant Professor. Dr. Shen holds 7 awarded U.S. patents in the MEMS and microelectronics areas. His current research is focused on wide bandgap semiconductor microelectronics and optoelectronic devices for high-energy-efficiency applications.