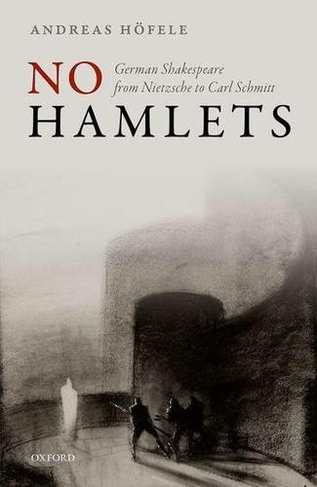 No Hamlets: German Shakespeare from Nietzsche to Carl Schmitt

No Hamlets is the first critical account of the role of Shakespeare in the intellectual tradition of the political right in Germany from the founding of the Empire in 1871 to the 'Bonn Republic' of the Cold War era. In this sustained study, Andreas Hoefele begins with Friedrich Nietzsche and follows the rightist engagement with Shakespeare to the poet Stefan George and his circle, including Ernst Kantorowicz, and the literary efforts of the young Joseph Goebbels during the Weimar Republic, continuing with the Shakespeare debate in the Third Reich and its aftermath in the controversy over 'inner emigration' and concluding with Carl Schmitt's Shakespeare writings of the 1950s. Central to this enquiry is the identification of Germany and, more specifically, German intellectuals with Hamlet. The special relationship of Germany with Shakespeare found highly personal and at the same time highIy political expression in this recurring identification, and in its denial. But Hamlet is not the only Shakespearean character with strong appeal: Carl Schmitt's largely still unpublished diaries of the 1920s reveal an obsessive engagement with Othello which has never before been examined. Interest in German philosophy and political thought has increased in recent Shakespeare studies. No Hamlets brings historical depth to this international discussion. Illuminating the constellations that shaped and were shaped by specific appropriations of Shakespeare, Hoefele shows how individual engagements with Shakespeare and a whole strand of Shakespeare reception were embedded in German history from the 1870s to the 1950s and eventually 1989, the year of German reunification. 17 black and white illustrations

Andreas Hoefele is Professor of English at Munich University. He is the author of Stage, Stake, and Scaffold: Humans and Animals in Shakespeare's Theatre (OUP, 2011) which won the 2012 Roland H. Bainton Prize for Literature. His publications in German include books on Shakespeare's stagecraft, late nineteenth-century parody, and Malcolm Lowry, as well as six novels. He served as President of the German Shakespeare Society from 2002 to 2011.