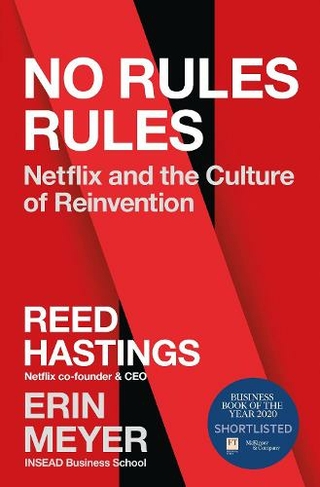 No Rules Rules: Netflix and the Culture of Reinvention

*** Shortlisted for the 2020 Financial Times & McKinsey Business Book of the Year *** It's time to do things differently. Trust your team. Be radically honest. And never, ever try to please your boss. These are some of the ground rules if you work at Netflix. They are part of a unique cultural experiment that explains how the company has transformed itself at lightning speed from a DVD mail order service into a streaming superpower - with 190 million fervent subscribers and a market capitalisation that rivals the likes of Disney. Finally Reed Hastings, Netflix Chairman and CEO, is sharing the secrets that have revolutionised the entertainment and tech industries. With INSEAD business school professor Erin Meyer, he will explore his leadership philosophy - which begins by rejecting the accepted beliefs under which most companies operate - and how it plays out in practice at Netflix. From unlimited holidays to abolishing approvals, Netflix offers a fundamentally different way to run any organisation, one far more in tune with an ever-changing fast-paced world. For anyone interested in creativity, productivity and innovation, the Netflix culture is something close to a holy grail. This book will make it, and its creator, fully accessible for the first time.

Reed Hastings (Author) Reed Hastings is an entrepreneur who has revolutionised entertainment since co-founding Netflix in 1997, serving as its chairman and CEO since 1999. His first company, Pure Software, was launched in 1991 and acquired just before Netflix was launched. Reed served on the California State Board of Education from 2000 to 2004 and is an active educational philanthropist. He has sat on the board of several educational organisations including Dreambox Learning, KIPP and Pahara. He received a BA from Bowdoin College in 1983 and an MSCS in artificial intelligence from Stanford University in 1988. Between Bowdoin and Stanford, Reed served in the Peace Corps as a volunteer teacher in Southern Africa.Erin Meyer (Author) Erin Meyer is the author of The Culture Map: Breaking Through the Invisible Boundaries of Global Business, and a professor at INSEAD, one of the world's leading international business schools. Her work has appeared in Harvard Business Review, The New York Times, and Forbes.com. In 2019, Erin was selected by the Thinkers50 as one of the fifty most influential business thinkers in the world. She received an MBA from INSEAD in 2004 and she currently lives in Paris, France. In 1994-95 Erin also served in the Peace Corps as a volunteer teacher in Southern Africa. Visit erinmeyer.com for more information.