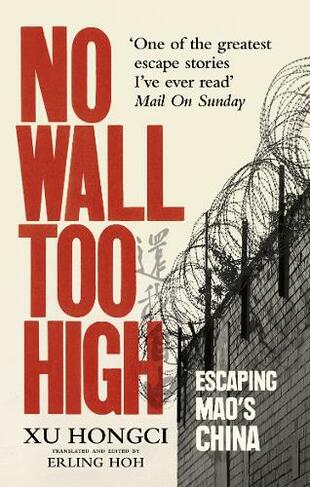 No Wall Too High: One Man's Extraordinary Escape from Mao's Infamous Labour Camps

'One of the greatest escape stories I've ever read' Mail on Sunday An ordinary man's extraordinary escape from Mao's brutal labour camps Xu Hongci was an ordinary medical student when he was incarcerated under Mao's regime and forced to spend years of his youth in China's most brutal labour camps. Three times he tried to escape. And three times he failed. But, determined, he eventually broke free, travelling the length of China, across the Gobi desert, and into Mongolia. It was one of the greatest prison breaks of all time, during one of the worst totalitarian tragedies of the 20th Century. This is the extraordinary memoir of his unrelenting struggle to retain dignity, integrity and freedom; but also the untold story of what life was like for ordinary people trapped in the chaos of the Cultural Revolution.

Xu Hongci It took Xu Hongci four attempts before he finally escaped the labour camps. He then travelled the length of China into Mongolia - only to be arrested and sentenced to two years in a Mongolian prison for illegally entering the country. After serving his sentence, Xu Hongci met and married a Mongolian nurse, started a family and, after Mao's death, returned to China where he died in 2008.Erling HohErling Hoh is a Swedish-Chinese journalist who came across a Chinese copy of Xu Hongci's memoir in a Hong Kong library. After tracking down Xu Hongci's Chinese publisher and, eventually, his wife and children, he obtained the original manuscript that contained much richer content than the original Chinese edition.