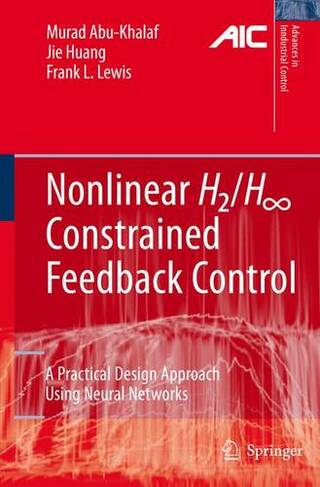 This book provides techniques to produce robust, stable and useable solutions to problems of H-infinity and H2 control in high-performance, non-linear systems for the first time. The book is of importance to control designers working in a variety of industrial systems. Case studies are given and the design of nonlinear control systems of the same caliber as those obtained in recent years using linear optimal and bounded-norm designs is explained. 2 Tables, black and white; XX, 204 p.

Frank Lewis is a Professor of Electrical Engineering at The University of Texas at Arlington, where he was awarded the Moncrief-O'Donnell Endowed Chair in 1990 at the Automation and Robotics Research Institute. He is a Fellow of the IEEE, a member of the New York Academy of Sciences, and a registered Professional Engineer in the State of Texas. He is a Charter Member (2004) of the UTA Academy of Distinguished Scholars. He has served as Visiting Professor at Democritus University in Greece, Hong Kong University of Science and Technology, Chinese University of Hong Kong, National University of Singapore. He is an elected Guest Consulting Professor at both Shanghai Jiao Tong University and South China University of Technology.Dr. Lewis's current interests include intelligent control, neural and fuzzy systems, microelectromechanical systems (MEMS), wireless sensor networks, nonlinear systems, robotics, condition-based maintenance, and manufacturing process control. He is the author/co-author of 3 U.S. patents, 157 journal papers, 23 chapters and encyclopedia articles, 239 refereed conference papers, nine books, including Optimal Control, Optimal Estimation, Applied Optimal Control and Estimation, Aircraft Control and Simulation, Control of Robot Manipulators, Neural Network Control, High-Level Feedback Control with Neural Networks and the IEEE reprint volume Robot Control. He was elected to the Editorial Boards of International Journal of Control, Neural Computing and Applications, and Int. J. Intelligent Control Systems. He served as an Editor for the flagship journal Automatica. He is the recipient of an NSF Research Initiation Grant and has been continuously funded by NSF since 1982. Since 1991 he has received $4.8 million in funding from NSF and other government agencies, including significant DoD SBIR and industry funding and his research has won numerous awards and prizesDoctor Huang is a professor at the Department of Automation and Computer-aided Engineering, The Chinese University of Hong Kong. He is also the director of Applied Control and Computing Laborotory, and the head of the graduate division of Automation and Computer-aided Engineering. He has been advisory/visiting professor at several universities and a Science Advisor to the Leisure and Cultural Services Department of Hong Kong Special Administrative Region. His research interests include control theory and applications, robotics and automation, neural networks and scientific computing, and guidance and control of flight vehicles. His research has led to publications of over 100 technical papers in international journals and conferences, and four book chapters. Dr. Huang is a member of Editorial Board of Communications in Information and Systems, Control Theory and Applications, and Associate Editor of IEEE Transactions on Automatic Control. He was an Associate Editor of the Asian Journal of Control between 1999 and 2001. He has been Guest Editor for International Journal of Robust and Nonlinear Control, and Asian Journal of Control. He has served in the organizing committee or program committee of various major international conferences including the general chair of 2002 International Conference on Control and Automation, Publicity Chair of 2003 IEEE Conference on Decision and Control, and program committee member of the 1998, and 2002 IEEE Conferences on Decision and Control.