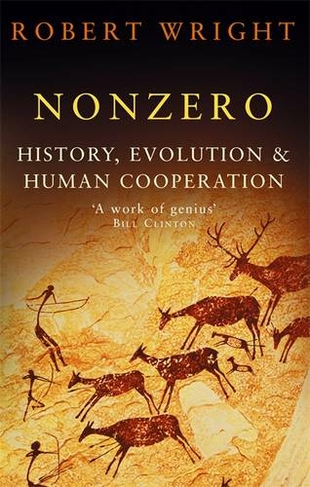 By Robert Wright (Author)
Paperback
https://www.whsmith.co.uk/products/nonzero-history-evolution-and-human-cooperation/robert-wright/paperback/9780349113340-12-000.html £10.65 rrp £12.99 Save £2.34 (18%)
GBP
Availability
In Stock
Free Delivery Available When You Spend £25 Or More
Details
Spend £25 On Products To Receive Free Standard Delivery To Your Home Or Free Next Working Day Click And Collect To Store
Share

In a book sure to stir argument for years to come, Robert Wright challen+ges the conventional view that biological evolution and human history are aimless. Ingeniously employing game theory - the logic of 'zero-sum' and 'non-zero-sum' games - Wright isolates the impetus behind life's basic direction: the impetus that, via biological evolution, created complex, intelligent animals, and then via cultural evolution, pushed the human species towards deeper and vaster social complexity. In this view, the coming of today's independent global society was 'in the cards' - not quite inevitable, but, as Wright puts it, 'so probable as to inspire wonder'. In a narrative of breathtaking scope and erudition, yet pungent wit, Wright takes on some of the past century's most prominent thinkers, including Isaiah Berlin, Karl Popper, Stephen Jay Gould, and Richard Dawkins. Wright argues that a coolly specific appraisal of humanity's three-billion-year past can give new spiritual meaning to the present and even offer political guidance for the future. This book will change the way people think about the human prospect.

Robert Wright has written extensively for THE ATLANTIC MONTHLY, THE NEW YORKER and TIME magazine, and currently works as a senior editor at THE NEW REPUBLIC.