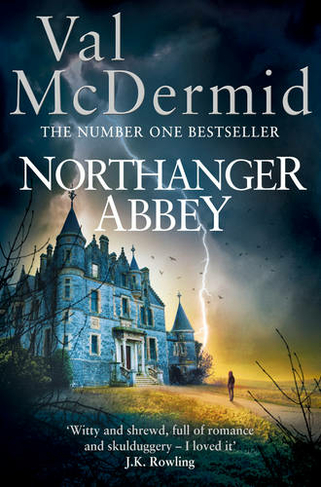 By Val McDermid (Author)
Paperback
https://www.whsmith.co.uk/products/northanger-abbey/val-mcdermid/paperback/9780007504299-12-000.html £7.37 rrp £8.99 Save £1.62 (18%)
GBP
Availability
In Stock
Free Delivery Available When You Spend £15 Or More
Details
Spend £15 On Eligible Products To Recieve Free Standard Delivery To You Home Or Free Next Working Day Click And Collect To Store
Share

Jane Austen in the hands of queen of crime, Val McDermid. Get ready for a very different Northanger Abbey. For Cat Morland life being home-schooled in Dorset is unendurably ordinary. To cope, she devours as many novels as possible, especially anything supernatural. But if Cat can tear her eyes away from the page, she's in for a shock: the very stuff of her dreams is about to come true. An invite to the Edinburgh Festival from some wealthy neighbours throws her in the way of a mysterious young man, Henry Tilney; a like-minded friend, Isabella Thorpe; and her odious brother, who threatens to ruin Cat's chances of adventure. But this heroine is not so easily deterred, especially when she's singled out by the Tilney family to stay with them at their imposing gothic castle, Northanger Abbey. Turrets and creaking doors there may be, but in the depths of the Scottish Borders Cat is isolated from the outside world, with no phone signal and no internet. She's all alone in an ancient abbey alive with old secrets and a family who are not quite as they seem. Is real life about to become more terrifying than the world of her imagination?

Val McDermid is the author of twenty-five bestselling novels, which have been translated into thirty languages, and have sold over ten million copies. She has won many awards internationally, including the CWA Gold Dagger for best crime novel of the year. She was inducted into the ITV3 Crime Thriller Awards Hall of Fame in 2009 and was the recipient of the CWA Diamond Dagger in 2010, awarded for sustained excellence and significant contribution to crime fiction. She has a son and a dog, and lives in the north of England.