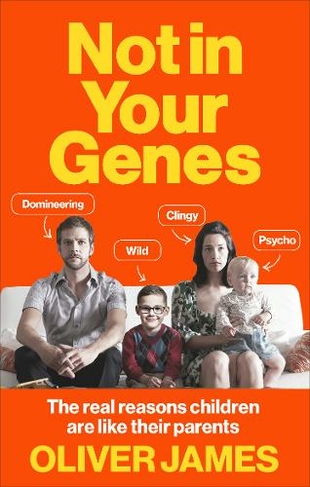 Not In Your Genes: The real reasons children are like their parents

Professor Robert Plomin, the world's leading geneticist, said in 2014 of his search for genes that explain differences in our psychology: 'I have been looking for these genes for fifteen years. I don't have any'. Using a mixture of famous and ordinary people, Oliver James drills deep down into the childhood causes of our individuality, revealing why our upbringing, not our genes, plays such an important role in our wellbeing and success. The implications are huge: as adults we can change, we can clutch our fates from predetermined destiny, as parents we can radically alter the trajectory of our childrens' lives, and as a society we could largely eradicate criminality and poverty. Not in Your Genes will not only change the way you think about yourself and the people around you, but give you the fuel to change your personality and your life for the better.

Oliver James trained and practised as a child clinical psychologist and, since 1987, has worked as a writer, journalist and television documentary producer and presenter. His books include Juvenile Violence in a Winner-Loser Culture, the bestselling They F*** You Up and Britain on the Couch, which was also a successful documentary series for Channel 4. He is a trustee of two children's charities: the National Family and Parenting Institute and Homestart.