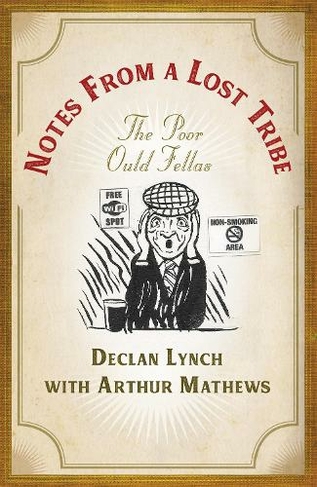 Notes from a Lost Tribe: The Poor Ould Fellas

By Declan Lynch (Author), Arthur Mathews (Author)
Hardback
https://www.whsmith.co.uk/products/notes-from-a-lost-tribe-the-poor-ould-fellas/declan-lynch/arthur-mathews/hardback/9781473687301-12-000.html £9.01 rrp £10.99 Save £1.98 (18%)
GBP
Availability
In Stock
Free Delivery Available When You Spend £25 Or More
Details
Spend £25 On Products To Receive Free Standard Delivery To Your Home Or Free Next Working Day Click And Collect To Store

Combining the razor-sharp wit of writer Declan Lynch with illustrations and contributions from Father Ted co-creator Arthur Mathews. Since Declan Lynch and Arthur Mathews first shone a light into this darkest corner of the darkest living room in all of Ireland over a decade ago, things have actually got worse for that almost-forgotten species we call the Poor Ould Fellas - impossible though it seems. Further confined to their unhappy dwelling places by the drink-driving laws, a new range of challenges have emerged to torment them in a baffling post-analog world, where emails seek to release them from the few remaining shillings that weren't stolen by bankers during the crash. Now they must negotiate a universe full of new words (falafel, bitcoin, Spotify) and concepts (texting, sexting, going away for the weekend, composing a tweet, growing a beard, online banking) that mean absolutely nothing to them. Notes from a Lost Tribe is a hilarious road map through a world of forgotten men and their equally forgotten dogs, who ask for so little - yet it is denied them. And still ... somehow ... inexplicably ... they go on.

Declan Lynch (Author) Declan Lynch began his writing career at the age of seventeen with Ireland's rock and roll magazine Hot Pressand now writes for the Sunday Independent. He is the author of several works of fiction and non-fiction, including the acclaimed novel The Rooms, and The Ponzi Man.Arthur Mathews (Author) Arthur Mathews attended the College of Marketing and Design before (eventually) joining the Hot Press Art Department in 1985.After a spell in The Joshua Trio, he began writing for television along with fellow Hot Presser Graham Linehan.Among the shows he has created and/or written are Paris, Toast Of London, Father Ted, Hippies, Big Train, The All New Alexei Sayle Show, Brass Eye, Harry Enfield And Chums, The Fast Show, Black Books, Val Falvey TD and the film Wide Open Spaces.He has written a 'bogus memoir', Well Remembered Days (John Peel's favourite book of all time!), as well as The Craggy Island Parish Newsletters, Father Ted - The Complete Scripts (with Graham Linehan), The Book Of Poor Ould Fellas (with Declan Lynch), Angry Baby, and Toast On Toast.As a cartoonist he contributed 'Charles J. Haughey's Believe It or Not' to Hot Press, 'Doctor Crawshaft's World Of Pop' to the New Musical Express and 'The Chairman' to the Observer Sport Monthly.In the theatre, he created and co-wrote the long running musical I, Keano.On radio he has created and written The Golden Age and Men About The House for BBC Radio 4 and Luneen Live (co-written with Paul Woodfull) for RTE.He regards his annual Border Fascist contribution to Hot Press as one of his finest achievements.