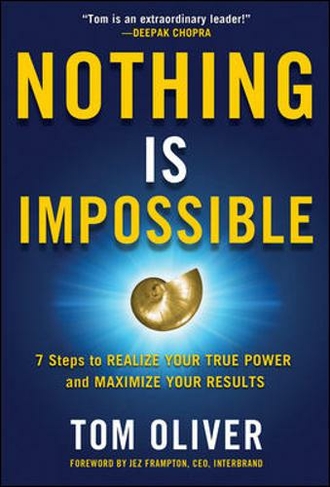 Nothing Is Impossible: 7 Steps to Realize Your True Power and Maximize Your Results

Tom Oliver has shared his extraordinary secrets with Bono, Richard Branson, the Dalai Lama, and Deepak Chopra.Now he shares them with you.Are you ready to lose your self-doubt and use the tools you already have to turn your wildest dreams into tangible reality? This book is about to put them all at your fingertips. In this extraordinary new road map for success, Tom Oliver--a motivational self-made entrepreneur and coach to many of the world's most notable CEOs,philanthropists, and entertainers--shows you how to dramatically alter your life path. Nothing IsImpossible is a proven seven-step whole-brain plananyone can use to improve his or her business, life,and career from the man Deepak Chopra calls "anextraordinary leader." Have you ever struggled with success? Have you ever felt that your strengths were left untapped--your true talents unrecognized? Do you have a different plan for yourself from the one others might imagine for you? As Oliver explains, what really distinguishes people who get things done and realize their dreams from those who don't is that they don't allow their self-doubts to stop them--they don't cultivate what the Buddha called the "habit of doubt." This book dispels that doubt, freeing you to set and meet the personal and professional goals most people only dream about. Clearly, step by step, with personal anecdotes from some of the world's most influential leaders and his own remarkable life, Oliver presents a practical playbook for anyone who wants to change his or her life and future. It also features comprehensive exercises and abundant resources. Whether you're a business professional, athlete,entrepreneur, artist, or anyone else, after readingand implementing the wisdom of Nothing Is Impossibleyou'll be able to transcend the boundaries of what today's world thinks is possible.

TOM OLIVER is a business leader, global socialentrepreneur, philanthropist, and visionary who has worked with some of the world's leading figures, such as Desmond Tutu and the Dalai Lama, as well as CEOs of several Fortune 500 companies. He is founder and chair of the global Leadership Circle at the Manchester Business School in the UK and is also the founder and CEO of the World Peace Foundation, which the Dalai Lama called "a globalcommunity of millions of people who take an activestance for peace," and which Nobel Peace Prize laureateDesmond Tutu has called "the most influential peace gathering in history." Oliver is also an artist, singer, and songwriter.