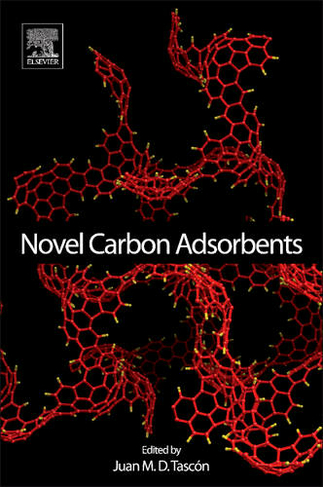 Also available on eBook for £145.91. Click here to purchase from Rakuten Kobo

Following in the lineage of Adsorption by Carbons (Bottani & Tascon, 2008), this work explores current research within contemporary novel carbon adsorbents. Both basic and applied aspects are discussed for this important class of materials. The first section of the book introduces physical adsorption and carbonaceous materials, and is followed by a section concerning the fundamentals of adsorption by carbons. This leads to development of a series of theoretical concepts that serve as an introduction to the following section in which adsorption is mainly envisaged as a tool to characterize the porous texture and surface chemistry of carbons. Particular attention is paid to novel nanocarbons, and the electrochemistry of adsorption by carbons is also addressed. Finally, several important technological applications of gas and liquid adsorption by carbons in areas such as environmental protection and energy storage constitute the last section of the book. Illustrated; Illustrations, unspecified

Juan M. D. Tascon graduated in Chemistry from University of Oviedo, Spain and in 1981 received a Doctor degree from Complutense University, Madrid. With the only exception of two postdoctoral stays, one in Belgium (Univ. of Louvain, with Prof. B. Delmon) and another in the USA (New York University, with Prof. M.J.D. Low) he has spent his entire career at the Spanish National Research Council (CSIC), first at the Institute of Catalysis and Petrochemistry (Madrid), and, from 1985 on, at the National Carbon Institute (Oviedo) where he is now a Research Professor and Director. His work has been mainly focused on the surface properties of carbon materials such as carbon fibers, activated carbons (and porous carbons in general) and, lately, graphene. He has published over 250 papers in refereed journals and has edited three books. Juan is serving in the advisory editorial boards of Fuel, Journal of the Argentine Chemical Society and Recent Patents on Materials Science, and is an Editor of Carbon since 2012.