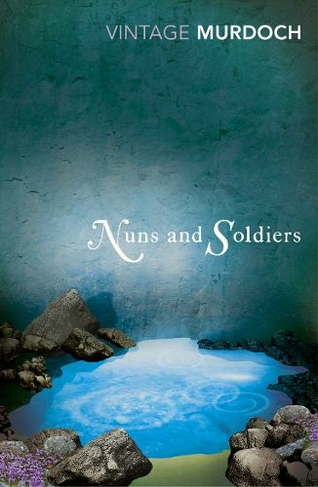 By Iris Murdoch (Author)
Paperback
https://www.whsmith.co.uk/products/nuns-and-soldiers/iris-murdoch/paperback/9780099285359-12-000.html N/A
GBP
Availability
Currently unavailable. We dont know when or if this item will be back in stock
Free Saver Delivery on orders over £25
Details
FREE SHIPPING over £25 for Saver Delivery
Share

Gertrude has lost her husband and Anne, an ex-nun, her God. They plan to live together and do good works. Meanwhile a cohort of interested parties circle. The 'Count', a Polish man in exile watches over Gertrude with loving patience. Tim, a failed painter, plans with his punk girlfriend to live off his rich friends. Who will judge whom in this intricate pattern of love and deceit? Who will behave well and who badly? Who will be lucky?

Iris Murdoch was born in Dublin in 1919. She read Classics at Somerville College, Oxford, and after working in the Treasury and abroad, was awarded a research studentship in Philosophy at Newnham College, Cambridge. In 1948 she returned to Oxford as fellow and tutor at St Anne's College and later taught at the Royal College of Art. Until her death in 1999, she lived in Oxford with her husband, the academic and critic, John Bayley. She was made a Dame of the British Empire in 1987 and in the 1997 PEN Awards received the Gold Pen for Distinguished Service to Literature.Iris Murdoch made her writing debut in 1954 with Under the Net. Her twenty-six novels include the Booker prize-winning The Sea, The Sea (1978), the James Tait Black Memorial prize-winning The Black Prince (1973) and the Whitbread prize-winning The Sacred and Profane Love Machine (1974). Her philosophy includes Sartre: Romantic Rationalist (1953) and Metaphysics as a Guide to Morals (1992); other philosophical writings, including 'The Sovereignty of Good' (1970), are collected in Existentialists and Mystics (1997).

Nuns and Soldiers
Nuns and Soldiers
Iris Murdoch
Paperback
Currently unavailable. We dont know when or if this item will be back in stock
https://www.whsmith.co.uk/products/nuns-and-soldiers/iris-murdoch/paperback/9780099285359.html N/A
GBP