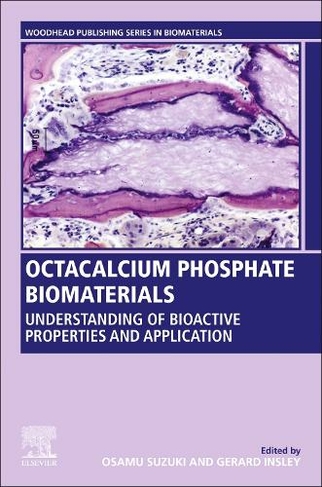 Also available on eBook for £198.95. Click here to purchase from Rakuten Kobo

Octacalcium Phosphate Biomaterials: Past, Present and Future is a comprehensive study of octacalcium phosphate (OCP), a next generation biomaterial for bone regeneration. By focusing both on fundamental research and the use of OCP as a scaffold material, this book explores its potential to deliver improved clinical results. Early chapters in the book discuss OCP's effects on bone cell activity, cellular interactions and their role in bone formation, repair and replacement. Later chapters cover topics such as drug delivery, synthesis methodologies and future analysis techniques. This will be an invaluable and unique resource for researchers, clinicians, students and industrialists in the area of orthopedics and dentistry. OCP is known to be a pre-cursor to hydroxyapatite in the human biomineralization process that forms bone and tooth enamel. Research studies that have emerged in recent years suggest OCP's tremendous potential as a bioactive material.

Gerard Insley is Chief Scientific Officer at CelgenTek and ZimmerBiomet.Gerard is a scientist and inventor based in Ireland. Gerard has worked in the life science arena for over twenty five years focussing on biomaterials for skeletal repair. Gerard's main passion is inspiring technical teams to solve the many difficulties facing clinicians in repairing replacing and augmenting fractured and compromised bone.With over a dozen biomaterials products commercialised and currently on the market, Gerard continues to focus on developing disruptive biomaterials based solutions for unsolved clinical problems. These include the first load bearing biomaterial for hip revision applications BoneSave (TM), first Calcium Phosphate cement for screw augmentation trauma applications Hydroset (TM) and the first premixed calcium cement on the market iN3 (TM).Gerard has worked with Howmedica Stryker and Zimmer and has co-founded 4 biomaterials companies with over 30 peer reviewed publications presentations and posters and more than a dozen patents in the field. Osamu Suzuki is Professor and Chair of Division of Craniofacial Function Engineering, Tohoku University Graduate School of Dentistry, Sendai, Japan since 2004. The division is in charge of education and research in the field of biomaterials science and skeletal tissue engineering. He was Researcher in Japan Fine Ceramics Co. Ltd., Sendai, and Senior Researcher in JGC Corp., Yokohama/Oarai, Japan from 1986 to 2004. He found in the first place an osteoconductivity of synthetic octacalcium phosphate (OCP) in comparison with other calcium phosphate materials, such as non-sintered hydroxyapatite, in his PhD study, carried out until 1991, in Tohoku University Graduate School of Medicine, Sendai, Japan. He has also been developing OCP bone substitute materials, combined with natural polymers, such as collagen, gelatin, alginate and hyaluronic acid, together with his collaborators since 2004. He received his MSc degree in Yamagata University Graduate School of Engineering, Yonezawa, Japan on strength design of bioceramic materials at 1986. He joined a visiting scientist program in Forsyth Dental Center, Physical Chemistry Department, Boston, USA from 1992 to 1994 to study the synthesis and the physicochemical properties in OCP and its related calcium phosphate materials. He has also been focusing on the study to elucidate the mechanism on how OCP materials property relates to activating bone regeneration associated with the cellular function involved in the bone repair by OCP. He received the Award of Japanese Society for Biomaterials (JSB) in 2015 by a series of studies "Elucidation of osteoconductivity and establishment of biomaterial science of OCP bone substitute materials." He is an Executive Committee Members of the JSB and the Japanese Society for Dental Materials and Devices (JSDMD), respectively, and Editor-in-Chief of Dental Materials Journal since 2018.