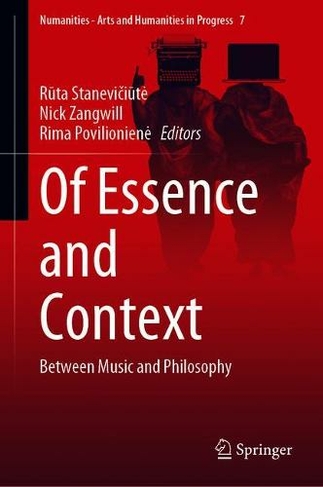 Of Essence and Context Between Music and Philosophy 7 1st ed. 2019

This book provides a new approach to the intersections between music and philosophy. It features articles that rethink the concepts of musical work and performance from ontological and epistemological perspectives and discuss issues of performing practices that involve the performer's and listener's perceptions. In philosophy, the notion of essence has enjoyed a renaissance. However, in the humanities in general, it is still viewed with suspicion. This collection examines the ideas of essence and context as they apply to music. A common concern when thinking of music in terms of essence is the plurality of music. There is also the worry that thinking in terms of essence might be an overly conservative way of imposing fixity on something that evolves. Some contend that we must take into account the varying historical and cultural contexts of music, and that the idea of an essence of music is therefore a fantasy. This book puts forward an innovative approach that effectively addresses these concerns. It shows that it is, in fact, possible to find commonalities among the many kinds of music. The coverage combines philosophical and musicological approaches with bioethics, biology, linguistics, communication theory, phenomenology, and cognitive science. The respective chapters, written by leading musicologists and philosophers, reconsider the fundamental essentialist and contextualist approaches to music creation and experience in light of twenty-first century paradigm shifts in music philosophy. 10 Illustrations, color; 20 Illustrations, black and white; XV, 409 p. 30 illus., 10 illus. in color.

Rima Povilioniene (b. 1975), Ph.D. She is an associate professor and the Head of theDepartment of Music Theory of the Lithuanian Academy of Music, the assistant editor-in-chief of the scientific yearly Lithuanian Musicology and an editor at the Lithuanian NationalPhilharmonic. Rima was on internships at the Institute of Musicology at Leipzig University(2004) and IRCAM (2012). She has edited over 15 collections and published around 30articles and more than 150 critic reviews. She was a guest lecturer at the Leipzig University,Tbilisi Conservatoire, Belgrade University of Arts, J. Vitols Latvian Academy of Music, Vilnius University, Kaunas University of Technology etc. Her monograph Musica Mathematica (in Lithuanian, 2013) was awarded the Vytautas Landsbergis prize for the best musicological work. The English version of the monograph was published by Peter Lang in 2016. She is an editor of two collections for Springer (2017 and 2018).Ruta Staneviciute (b. 1960), Ph.D. She is a professor at the Lithuanian Academy of Musicand Theatre. Her current fields of interest are modernism and nationalism in the 20th-21stc. music, philosophical and cultural issues in the analysis of contemporary music, and thestudies of music reception. She has conducted research at the universities of Warsaw,Cambridge, King's College London, Berlin University of Arts and other institutions. She is the author of the book The Figures of Modernity. The International Society for Contemporary Music and the Spread of Musical Modernism in Lithuania (in Lithuanian, 2015). She also edited and co-edited 10 collections of articles on twentieth- and twenty-first-century musical culture and history of music reception; has prepared a college textbook Music as a Cultural Text (2007). Currently she co-edited a collection of musicological articles, Sociocultural Crossings and Borders: Musical Microhistories (2015), in collaboration with the study groups Music and Cultural Studies, Shostakovich and his Epoch: Contemporaries, Culture and the State, and Stravinsky between East and West of the International Musicological Society. In 2005-2010, she was a chair of the Musicological section at the Lithuanian Composers' Union and in 2003-2008 a chair of the Lithuanian section of the International Society for Contemporary Music.Nick Zangwill (b. 1957), Ph.D. He is Ferens Professor of Philosophy in the University of Hull. He is the author of The Metaphysics of Beauty (Cornell 2001), Aesthetic Creation (Oxford 2007) and Music and Aesthetic Realism: Formalism and the Limits of Description (Routledge 2015). He is co-editor with Andy Hamilton of Scruton's Aesthetics, Palgrave, 2012. He is also the author of numerous articles in aesthetics, metaethics, philosophy of mind, and metaphysics. He has previously worked at the universities of Durham, Oxford and Glasgow, with visiting positions at Osaka, Ritsumeikan, Sao Paulo, UNICAMP, the Institute of Fundamental Sciences in Tehran, Hebrew University Jerusalem, Huazhong University of Science and Technology, Brown, Ohio State, and Padua. He was Visiting Research Professor at the Murphy institute at Tulane University.