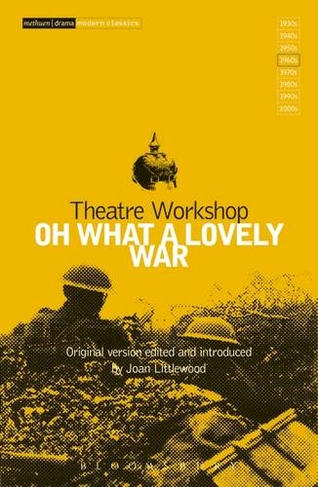 By , Joan Littlewood (Contributor)
Paperback
£10.66 rrp £10.99 Save £0.33 (3%)
GBP
Availability
In Stock
Free Delivery Available When You Spend £15 Or More
Details
Spend £15 On Products To Receive Free Standard Delivery To Your Home
Share

Oh What a Lovely War is a theatrical chronicle of the First World War, told through the songs and documents of the period. First performed by Joan Littlewood's Theatre Workshop at the Theatre Royal, Stratford East, London in 1963, it received the acclaim of London audiences and critics. It won the Grand Prix of the Theatre des Nations festival in Paris that year and has gone on to become a classic of the modern theatre. In 1969 a film version was made which extended the play's popular success. The play is now on the standard reading list of schools and universities around the UK and was revived by the Royal National Theatre in 1998. This new version of the play, as edited by Joan Littlewood, returns the script to its original version. Includes a new photo section of the original production, and an Afterword by Victor Spinetti. 1 colour, 8 page sections