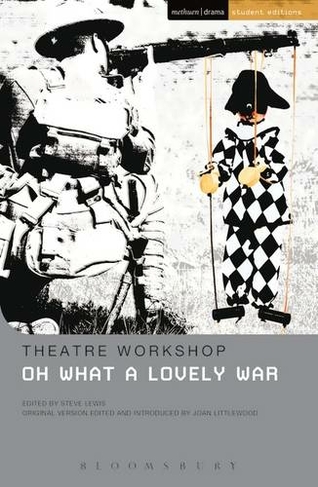 Oh What a Lovely War

By , Joan Littlewood (Contributor), Steve Lewis (Contributor)
Paperback
£10.11 rrp £10.99 Save £0.88 (8%)
GBP
Availability
In Stock
Free Delivery Available When You Spend £15 Or More
Details
Spend £15 On Products To Receive Free Standard Delivery To Your Home Or Free Next Day Click and Collect To Stores
Share

Fully annotated student edition of a modern classic Oh What a Lovely War is a theatrical chronicle of the First World War, told through the songs and documents of the period. First performed by Joan Littlewood's Theatre Workshop at the Theatre Royal, Stratford East, London in 1963, it received the acclaim of London audiences and critics. It won the Grand Prix of the Theatre des Nations festival in Paris that year and has gone on to become a classic of the modern theatre. In 1969 a film version was made which extended the play's popular success. The play is now on the standard reading list of schools and universities around the UK and was revived by the Royal National Theatre in 1998. 1 colour, 8 page sections

CHRIS MEGSON is Senior Lecturer in Drama and Theatre at Royal Holloway College, University of London, UK. His recent publications include The Methuen Drama Book of Naturalist Plays (2010); his book on The Seventies, for 'Methuen's Decades of Modern British Playwrighting' series, is forthcoming in 2012. He has published widely on British theatre culture since 1968 and documentary/Tribunal theatre.