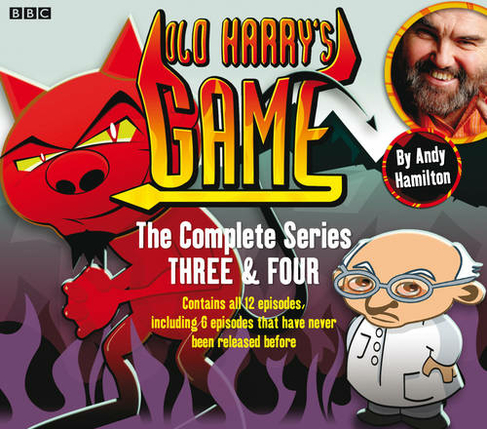 In Series Three, love is in the air and Satan becomes concerned about his image; the Professor meets Bill Clinton; Satan holds a major football tournament and remakes Casablanca with a mutant alien; Satan and the Professor enter Scumspawn's brain; and God hears that rules are being broken in Hell. In Series Four, Satan punishes a feng shui expert; Scumspawn tries to deal with a lager lout; there are complaints about the lighting in Hell; Satan visits Yeats and tries to sleep for the first time; and God turns up for a chat. Starring James Grout as the Professor, Jimmy Mulville as Thomas, Robert Duncan as Scumspawn and Andy Hamilton as Satan. Contains all twelve episodes from the third and fourth series of the Sony Award-winning comedy show. `One of the great comic creations of recent years' - Sunday Telegraph. ' one of the best-written comedies around, sustained over its 12 years on the air by brilliant performances and production' - Daily Telegraph. 6 CDs. 6 hrs.

From Andy Hamilton: People often ask me (well, journalists sometimes ask me) where I got the idea of writing a comedy set in Hell, and I usually tell them that I found it in Woolworths. I give them this flip, smartarse answer because the truth is I can't actually remember. No doubt, in part, I was attracted by the notion of consigning the likes of Robert Maxwell to the torment of the eternal fires. Who wouldn't find that funny? And playing Satan, of course, was always going to allow me to generally show off in a shameless way, and pretend I had the nether regions of a goat. So that was another attraction. But the actual specific trigger that caused me to sit down and write Old Harry's Game is a mystery to me now. Another question that is frequently slurred at me by swaying journalists is 'Which one of the characters do I think is most like me?' Now, this is a tricky one. The Professor, certainly, is the person I wish I was. He's kind, balanced, enquiring and optimistic. The part I actually play, though, is the jaundiced, cynical Satan, and the ease with which I slip into the hooves of this sadistic schemer is, frankly, a little worrying. There are times, too, when the disgusting, depraved Thomas starts to look disturbingly familiar. But, of all the characters, the one I suspect I resemble most is the disaster-prone, eager-to-please Scumspawn (who made his first appearance in the second series as Satan's bungling assistant). From time to time, I get quizzed about the prospects of Old Harry's Game transferring to television. Well, it wouldn't be an easy transition because the show is so quintesentially radio. After all, on radio we can transform a character into a 40-foot aubergine, and no one writes in to quibble about how convincing it is. Every listener visualises their own impossibly gigantic eggplant. If we attempted the same effect on BBC 1 then we would be inundated with pedantic letters from greengrocers. Finally, there is one question that journalists are always asking me, namely 'Is there any truth in the rumours about me and Catherine Zeta-Jones?' Well I'm sorry, but I feel it would be wrong for me to comment, especially when the poor girl is trying so hard to get over me. End of story. Andy Hamilton.