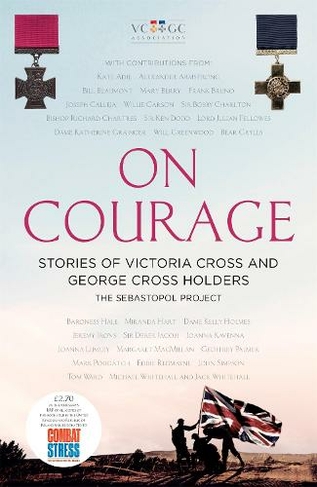 On Courage: Stories of Victoria Cross and George Cross Holders

Paperback
£9.01 rrp £10.99 Save £1.98 (18%)
GBP
Availability
In Stock
Free Delivery Available When You Spend £15 Or More
Details
Spend £15 On Products To Receive Free Standard Delivery To Your Home Or Free Next Day Click and Collect To Stores
Share

On Courage is a collection of twenty-eight moving and inspirational stories of valour displayed by recipients of the Victoria Cross and George Cross. *GBP2.70 of the publisher's RRP of all copies of this book sold in the United Kingdom and Republic of Ireland will be donated to Combat Stress.* WITH CONTRIBUTIONS FROM: Alexander Armstrong, Baroness Hale, Bear Grylls, Bill Beaumont, Bobby Charlton, Katherine Grainger, Kelly Holmes, Derek Jacobi, Eddie Redmayne, Frank Bruno, Geoffrey Palmer, Jeremy Irons, Joanna Kavenna, Joanna Lumley, John Simpson, Joseph Calleja, Julian Fellowes, Kate Adie, Ken Dodd, Margaret MacMillan, Mark Pougatch, Mary Berry, Michael Whitehall and Jack Whitehall, Miranda Hart, Richard Chartres, Tom Ward, Will Greenwood, and Willie Carson. From RAF flight engineer Norman Jackson, who climbed out onto the wing of a Lancaster bomber in flight to put out a fire, using a twisted parachute as a rope, on the night his first child was born; children's writer turned Assistant Section Officer Noor Inayat-Khan, who was the first female operator to infiltrate occupied France and refused to abandon what had become the most dangerous post in the country; to Irish seaman and Antarctic explorer Tom Crean, who struck out alone for a supply depot during Captain Scott's expedition to the South Pole to save the life of his ailing companion, these courageous men and women are an inspiration to us all. Written by leading historians and authors Tom Bromley, Saul David, Paul Garlington, James Holland and Dr Spencer Jones, these incredible accounts tell of the recipients' determination and selfless actions in times of war. Each story is introduced by a public figure, including Mary Berry, Bear Grylls, Sir Bobby Charlton, Joanna Lumley, Eddie Redmayne and the late Sir Ken Dodd. 2x 8pp. plate section

The Sebsastopol Project is a charitable endeavor aimed at inspiring the public with stories of the diverse and courageous acts of men and women awarded the Victoria Cross and George Cross.