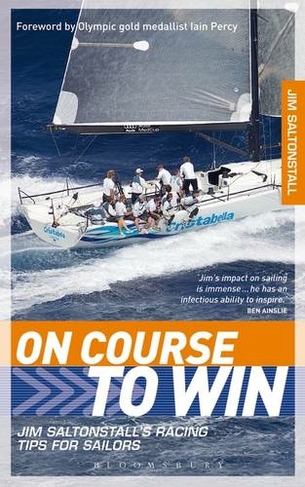 On Course to Win Jim Saltonstall's Racing Tips for Sailors

Also available on eBook for £13.79. Click here to purchase from Rakuten Kobo

Jim Saltonstall has coached multiple National, European, World and Olympic racing champions, including Ben Ainslie, one of Britain's most successful Olympians. This quick reference handbook distills the wisdom of 40 years in the business to help all dinghy, yacht and windsurfers to improve their performance in one of the most challenging sports in the world. The book tackles all the issues that can arise at any point on the racecourse, from the starting line to the first mark to the finish line. It explains how to prepare for a race and how to get the best out of the boat in an accessible format (bite sized advice, tips and wisdom) and with an encouraging approach, offering intelligent analysis peppered with Jim's trademark sense of humour. Featuring photographs that illustrate specific aspects of all races and a checklist of all the key issues racers need to think about as they progress around the course, this book should be in every would-be champion's kitbag, both on and off the water. Endorsed by Ben Ainslie and with a foreword by Olympic gold medal-winner Iain Percy. Colour photos throughout

Jim Saltonstall has been a racing coach for almost 40 years, 20 of which were with the RYA, including coaching the British Olympic team in both 1996 and 2000. He was voted Yachtsman of the Year in 1984 and 1995 with the GBR Youth Team. He hosts international seminars around the world, and was awarded the MBE in 1996 for his services to sport and young people.