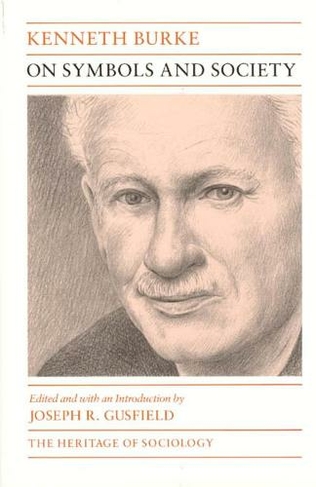 On Symbols and Society: (Heritage of Sociology Series 2nd ed.)

Kenneth Burke's innovative use of dramatism and dialectical method have made him a powerful critical force in an extraordinary variety of disciplines--education, philosophy, history, psychology, religion, and others. While most widely acclaimed as a literary critic, Burke has elaborated a perspective toward the study of behavior and society that holds immense significance and rich insights for sociologists. This original anthology brings together for the first time Burke's key writings on symbols and social relations to offer social scientists access to Burke's thought. In his superb introductory essay, Joseph R. Gusfield traces the development of Burke's approach to human action and its relationship to other similar sources of theory and ideas in sociology; he discusses both Burke's influence on sociologists and the limits of his perspective. Burke regards literature as a form of human behavior--and human behavior as embedded in language. His lifework represents a profound attempt to understand the implications for human behavior based on the fact that humans are "symbol-using animals." As this volume demonstrates, the work that Burke produced from the 1930s through the 1960s stands as both precursor and contemporary key to recent intellectual movements such as structuralism, symbolic anthropology, phenomenological and interpretive sociology, critical theory, and the renaissance of symbolic interaction. 1Illustrations