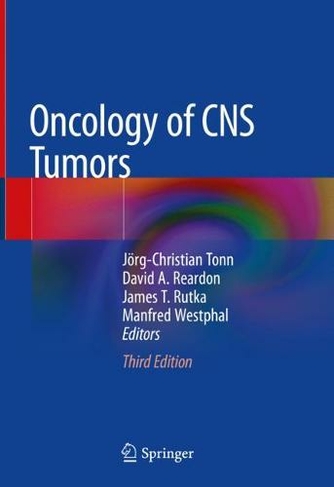 This book is an easy-to-use reference that provides ready guidance on the diagnosis and treatment of the full range of tumors of the central nervous system in adults and children. The new edition has been completely revised to reflect the continually evolving landscape of neuro-oncology and provide readers with a thorough update that will inform their clinical practice. Since the previous edition, molecular neuropathology has progressed considerably, leading to a new understanding of specific clinical entities with corresponding changes in treatment concepts. Moreover, tumor biology has become better integrated with clinical neuro-oncology in truly translational efforts. These advances receive detailed attention. In addition, the structure of the book has been adapted to align with the revised 2016 version of the WHO Brain Tumor Classification. Once again, the contributors have been carefully selected as leading experts in the field. Oncology of CNS Tumors is already established as a widely used reference, and this new edition will provide optimal value for highly specialized comprehensive neuro-oncology centers as well as practicing clinicians and researchers. 150 Tables, color; 113 Illustrations, color; 163 Illustrations, black and white; X, 794 p. 276 illus., 113 illus. in color.

Joerg-Christian Tonn, MD, serves since 2001 as Professor and Chairman of the Department of Neurosurgery at the Ludwig-Maximilians-University in Munich (Campus Grosshadern). His primary research and clinical interests relate to surgical neurooncology of brain tumors and skull-base tumors. He focuses on translational aspects of neurooncology, techniques of local tumor treatment as well as combinations of different treatment modalities in brain and skull-base tumors, in addition he participated in many clinical trials as co-chair or investigator. His work also includes integration of molecular imaging such as PET-CT into clinical management. He is founding member of the European Association of Neurooncology (EANO) and has published over 350 peer-reviewed manuscripts including clinical and imaging guidelines. David A. Reardon, MD, currently serves as Clinical Director of the Center for Neuro-Oncology at the Dana-Farber Cancer Institute. He previously spent 11 years as Associate Deputy Director of the Preston Robert Tisch Brain Tumor Center at Duke University Medical Center. Dr. Reardon is an active researcher with special interests in the design and implementation of clinical trials for neuro-oncology and the preclinical evaluation of promising therapeutics for CNS tumors. His work includes using innovative clinical therapeutic agents to improve cure rates in patients with brain and spinal tumors, with particular focus on immunotherapeutics as well as molecular-targeting agents, anti-angiogenic reagents, cytotoxins, and other biologically based therapies. Dr. Reardon has published over 200 peer-reviewed manuscripts and received the R. Wayne Rundles Award for Excellence in Cancer Research. In 2013, he was elected as the tenth president of the Society for Neuro-Oncology. James Rutka, MD, PhD, has been a member of the surgical staff in the Division of Pediatric Neurosurgery, Hospital for Sick Children, Toronto, Canada, since 1990. Dr. Rutka is RS McLaughlin Professor and Chair of the Department of Surgery at the University of Toronto. He is also Director of the Arthur and Sonia Labatt Brain Tumour Research Centre at the university. Dr. Rutka's primary research and clinical interests relate to the science and surgery of human brain tumors. In 2010-11, he served as President of the American Association of Neurological Surgeons and in 2011 became President of the World Academy of Neurological Surgery and the American Academy of Neurological Surgery. In 2013, Dr. Rutka was installed as seventh Editor-in-Chief of the Journal of Neurosurgery. Dr. Rutka has received various prestigious awards, and in 2015 he was appointed as an Officer of the Order of Canada, the highest honor that can be bestowed upon a Canadian citizen. Manfred Westphal, MD serves as chairman of the department of neurosurgery at the university medical center Hamburg Eppendorf since 1999. He founded the Hans-Dietrich Herrmann Laboratory for Brain Tumor Biology in 1984 after returning from a postdoctoral fellowship at UCSF Medical Center. His interest has been in clinical and experimental neuro-oncology so besides numerous publications in the field of growth factors, angiogenesis, Invasion and glioma stem cell biology he has chaired or co-chaired four phase III trials including carmustine wafers, convection enhanced delivery of a toxin conjugate, suicide gene therapy with simitagene ceradenovec and a trial anti-EGF-R monoclonal antibody; in addition he participated in many other clinical trials as co-chair or investigator. His clinical and translational studies resulted in 280 peer reviewed articles. In 2014 he shared the Warner Prize for Cancer Research. He served as secretary of the EANS, secretary of the European Brain Council (Brussels) and as president of the German Academy of Neurosurgery. For two periods of totally 9 years he was elected to the neuroscience review board of the German Research Council (Bonn).