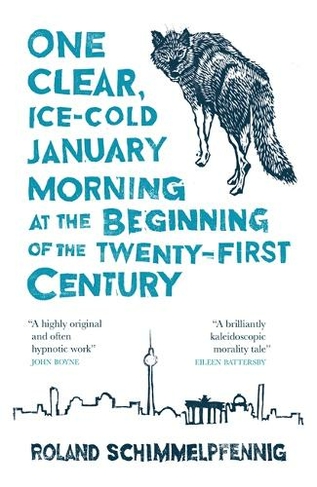 One Clear Ice-cold January Morning at the Beginning of the 21st Century: (MacLehose Press Editions)

By Roland Schimmelpfennig (Author), Jamie Bulloch (Contributor)
Paperback
£7.37 rrp £8.99 Save £1.62 (18%)
GBP
Availability
In Stock
Free Delivery Available When You Spend £15 Or More
Details
Spend £15 On Products To Receive Free Standard Delivery To Your Home Or Free Next Day Click and Collect To Stores

"A highly original and often hypnotic work . . . exactly the type of book that readers in search of striking European voices should embrace" John Boyne, author of THE BOY IN THE STRIPED PYJAMAS A contemporary Berlin fairy tale that bristles with urban truths - the first novel of Germany's best-known contemporary playwright One clear, ice-cold January morning shortly after dawn, a wolf crosses the border between Poland and Germany. His trail leads all the way to Berlin, connecting the lives of disparate individuals whose paths intersect and diverge. On an icy motorway eighty kilometres outside the city, a fuel tanker jack-knifes and explodes. The lone wolf is glimpsed on the hard shoulder and photographed by Tomasz, a Polish construction worker who cannot survive in Germany without his girlfriend. Elisabeth and Micha run away through the snow from their home village, crossing the wolf's tracks on their way to the city. A woman burns her mother's diaries on a Berlin balcony. And Elisabeth's father, a famous sculptor, observes the vast skeleton of a whale in his studio and asks: What am I doing here? And why? Experiences and encounters flicker past with a raw, visual power, like frames in a black and white film. Those who catch sight of the wolf see their own lives reflected, and find themselves searching for a different path in a cold time. This first novel of Germany's most celebrated contemporary playwright is written in prose of tremendous power and precision. Translated from the German by Jamie Bulloch

Roland Schimmelpfennig, born in 1967, is Germany's most celebrated contemporary playwright. He began his career as a journalist before studying to be a theatre director, and his plays have now been performed in more than forty countries. Schimmelpfennig is the recipient of the highest Playwriting Award in Germany, the Else-Lasker-Schuler-Prize, to honor his entire Oeuvre. One Clear, Ice-cold January Morning at the Beginning of the 21st Century is his first novel, shortlisted for the Leipzig Bookfair Prize in 2016. His play Winter Solstice is on tour across the U.K. in 2018. He lives in Berlin.