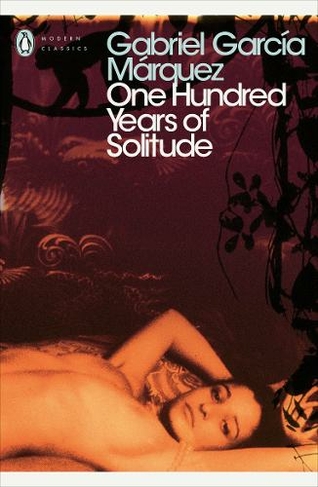 By Gabriel Garcia Marquez (Author), Gregory Rabassa (Contributor)
Paperback
https://www.whsmith.co.uk/products/one-hundred-years-of-solitude-penguin-modern-classics/gabriel-garcia-marquez/gregory-rabassa/paperback/9780141184999-12-000.html £7.37 rrp £8.99 Save £1.62 (18%)
GBP
Availability
In Stock
Free Delivery Available When You Spend £25 Or More
Details
Spend £25 On Products To Receive Free Standard Delivery To Your Home Or Free Next Working Day Click And Collect To Store

Equally tragic, joyful and comical, Gabriel Garcia Marquez's masterpiece of magical realism, One Hundred Years of Solitude is a seamless blend of fantasy and reality, translated from the Spanish by Gregory Rabassa in Penguin Modern Classics. Gabriel Garcia Marquez's great masterpiece is the story of seven generations of the Buendia family and of Macondo, the town they have built. Though little more than a settlement surrounded by mountains, Macondo has its wars and disasters, even its wonders and miracles. A microcosm of Columbian life, its secrets lie hidden, encoded in a book and only Aureliano Buendia can fathom its mysteries and reveal its shrouded destiny. Blending political reality with magic realism, fantasy with comic invention, One Hundred Years of Solitude is one of the most daringly original works of the twentieth century. Gabriel Garcia Marquez (b. 1928) was born in Aracataca, Colombia. He is the author of several novels, including Leaf Storm (1955), One Hundred Years of Solitude (1967), The Autumn of the Patriarch (1975), Chronicle of a Death Foretold (1981) and The General in His Labyrinth (1989). He was awarded the Nobel Prize for Literature in 1982. If you enjoyed One Hundred Years of Solitude, you might like Love in the Time of Cholera, also available in Penguin Modern Classics. 'With a single bound Gabriel Garcia Marquez leaps on the stage with Gunter Grass and Vladimir Nabokov ... dazzling' The New York Times

Gabriel Garcia Marquez (Author) Gabriel Garcia Marquez was born in Aracataca, Colombia, in 1927. He studied at the National University of Colombia in Bogota, and later worked as a reporter for the Colombian newspaper El Espectador and as a foreign correspondent in Rome, Paris, Barcelona, Caracas and New York. He is the author of several novels and collections of stories, including Eyes of a Blue Dog (1947), Leaf Storm (1955), No One Writesto the Colonel (1958), In Evil Hour (1962), Big Mama's Funeral (1962), One Hundred Years of Solitude (1967), Innocent Erendira and Other Stories (1972), The Autumn of the Patriarch (1975), Chronicle of a Death Foretold (1981), Love in the Time of Cholera (1985), The General in His Labyrinth (1989), Strange Pilgrims (1992), Of Love and Other Demons (1994) and Memories of My Melancholy Whores (2005). Many of his books arepublished by Penguin. He was awarded the Nobel Prize for Literature in 1982. Gabriel Garcia Marquez died in 2014.