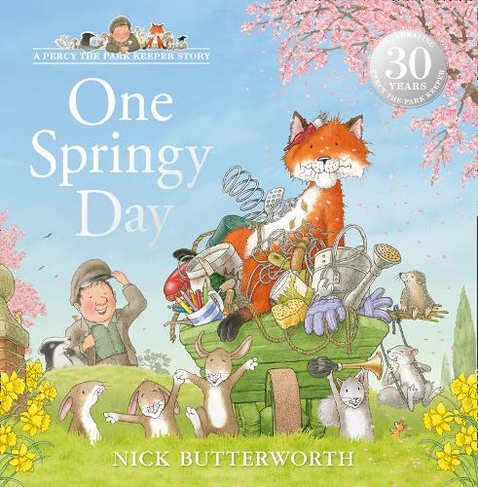 One Springy Day: (A Percy the Park Keeper Story)

By Nick Butterworth (Author)
Hardback
https://www.whsmith.co.uk/products/one-springy-day-a-percy-the-park-keeper-story/nick-butterworth/hardback/9780008279868-12-000.html £10.65 rrp £12.99 Save £2.34 (18%)
GBP
Availability
In Stock
Free Delivery Available When You Spend £25 Or More
Details
Spend £25 on eligible products to receive free standard delivery to home or free next working day click and collect to store
Share

Celebrate thirty years of Percy the Park Keeper and his animal friends with this funny story in the classic series from award-winning author and illustrator Nick Butterworth! Percy the park keeper and his animal friends are playing hide-and-seek in the park. The fox has found a great hiding place in Percy's workshop but when he falls into a pot of Very Strong Glue, he soon finds himself springing into an embarrassingly sticky situation! Is there anything his friends can do to help? Includes a surprise fold-out scene! More than 9 million Percy the Park Keeper books sold, worldwide!

Nick Butterworth was born in London and grew up in a sweet shop in Essex. He worked for various major graphic design companies before becoming a full-time author and illustrator. Among his picture books are Thud!, QPootle5, Jingle Bells, Albert le Blanc, Tiger and The Whisperer, winner of the Nestle Gold Award. But he is best known for his stories about Percy the Park Keeper, which have sold more than 9 million copies worldwide. Percy has also appeared in his own television series.