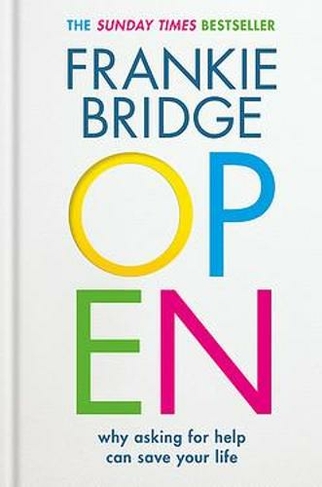 OPEN: Why asking for help can save your life

**THE SUNDAY TIMES BESTSELLER** 'Brave and beautiful... a first aid manual for your mind.' - Adam Kay, bestselling author of This is Going To Hurt 'Very readable. Very relatable. Intensely moving but also full of practical advice.' - Alastair Campbell "I lived with it in silence. I tried to conquer it alone. And then I asked for help. It took me hitting hard, sharp rock bottom for me to truly recognize how ill I was." In OPEN, Frankie Bridge opens up about her ongoing journey from breakdown to breakthroughs and through self-loathing, hospitalization and self-acceptance. Part narrative exploration, part guide, this book will help you to understand the importance of talking and helping each other. It combines guidance and advice from the psychologist and psychiatrist who pulled her back from the brink along with their notes on her and conversations with her. This book will help people open up about their mental health and encourage us all to speak out. Afterword by Mind. 'OPEN is an intimate, honest and powerful read. So personal you want to jump into the pages.' - Giovanna Fletcher, bestselling author of Happy Mum, Happy Baby 'A beautiful read.' - Zoe Ball, BBC Radio 2

Frankie Bridge (Author) Frankie Bridge is best known as one fifth of 'The Saturdays' and outside of music has established herself as a TV Presenter and Digital Influencer. Frankie became an ambassador for MIND after opening up about her experiences of anxiety, depression and panic attacks, after her hospitalisation in May 2012. Having initially dealt with these issues in silence, Frankie has been keen to support MIND in making sure no one has to face a mental health problem alone. Recently, she's been a key player in helping to launch the MIND partnership with Heads Together, as well as lending her support to Time to Talk Day. Frankie launched her first podcast series OPEN MIND focussing on mental health in 2019 and which debuted in the top ten podcasts upon release.