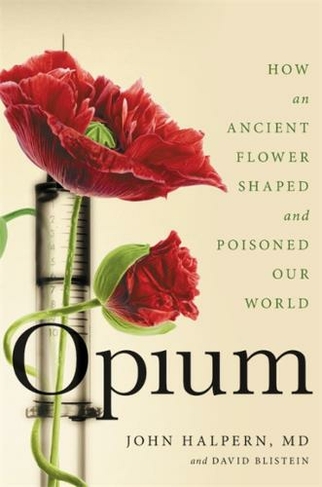 Opium: How an Ancient Flower Shaped and Poisoned Our World

In 2017 over 60,000 Americans died as the result of opioid overdoses, more than died annually in this country during the peak of the AIDs epidemic, more than die every year from breast cancer, and more Americans than died in the entire Vietnam War. But even though the overdose crisis ravaging our nation seems impossible to ignore, few understand how it came to be. OPIUM tells the extraordinary and at times harrowing story of how we arrived at today's crisis, a story that begins at the dawn of human civilization with enterprising poppy farmers in Mesopotamia, explores the breakthroughs of too-often forgotten experimental chemists in the Arab world who first refined poppy juice into opium, of colonial powers who spirited opium around the world in the interest of building out empires, of psychiatrists like Freud who ushered opium into modern medicine, and finally the story of the pharmaceutical conglomerates we know today that used opium and its more potent cousin, heroin, as a model for a wave of pills that laid the groundwork for today's overdose epidemic. Throughout, the book demonstrates how opium has served as a currency that helped develop the global economy. Wielded as a tool with which all kinds of brokers of power--empires like the British Commonwealth setting off China's Opium Wars, titans of modern medicine, and American drug companies, to name a few--could profit and expand, no matter the human cost, opium has proved both a frequent impetus for and obstacle to improving modern life. In its final chapter, OPIUM takes us inside the cutting edge of the opiate epidemic, showing how the nation's top doctors are confronting the crisis head on, in part using the lessons of opium's complex history.

John H. Halpern, MD, a psychiatrist in private practice, previously served as medical director of the Boston Center for Addiction Treatment, the largest substance-use disorder hospital in New England. He completed his residency and a fellowship in addiction research at Harvard Medical School programs. He spent over 20 years on the faculty of Harvard Medical School and during his professorship served as the director of his own research laboratory at McLean Hospital, supported by private grants and National Institute on Drug Abuse funding. David Blistein is a former writer for the PBS documentary Cancer, which was adapted from Siddhartha Mukherjee's Pulitzer Prize-winning history of cancer, The Emperor of All Maladies. He co-wrote Grover Cleveland Again! with legendary documentarian Ken Burns.