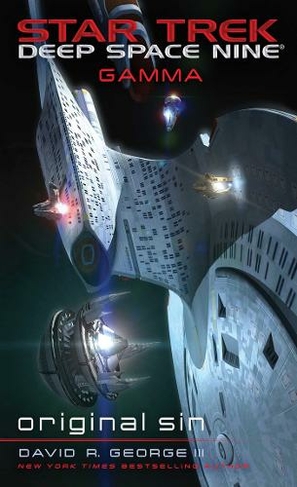 By David R. George (Author)
Paperback
https://www.whsmith.co.uk/products/original-sin/david-r-george/paperback/9781501133220-03-000.html £3.99 rrp £7.99 Save £4.00 (50%)
GBP
Availability
In Stock
Free Delivery Available When You Spend £25 Or More
Details
Spend £25 On Eligible Products To Recieve Free Standard Delivery To You Home Or Free Next Working Day Click And Collect To Store
Share

Continuing the Deep Space Nine saga-an original novel from New York Times bestselling author David R. George III! At the end of 2385, in a significant shift of its goals from military back to exploratory, Starfleet sent Captain Benjamin Sisko and the crew of the U.S.S. Robinson on an extended mission into the Gamma Quadrant. Tasked with a yearlong assignment to travel unknown regions, they set out to fulfill the heart of Starfleet's charter: to explore strange new worlds, and to seek out new life and new civilizations. But now three months into the mission, their first contact with an alien species comes in the form of an unprovoked attack on the Robinson. With the ship's crew suddenly incapacitated, seventy-eight of the 1,300 aboard are abducted-including Sisko's daughter, Rebecca. But Rebecca had already been kidnapped years earlier by a Bajoran religious zealot, part of a sect believing that her birth fulfilled the prophecy of the arrival of the Infant Avatar. Does her disappearance now have anything to do with the harrowing events of the past? And for what purposes have these enemies taken Sisko's daughter and the rest of the missing?

David R. George III has written more than a dozen Star Trek novels, including Ascendance, The Lost Era: One Constant Star, The Fall: Revelation and Dust, Allegiance in Exile, the Typhon Pact novels Raise the Dawn, Plagues of Night, and Rough Beasts of Empire, as well as the New York Times bestseller The Lost Era: Serpents Among the Ruins. He also cowrote the television story for the first-season Star Trek: Voyager episode "Prime Factors." Additionally, David has written nearly twenty articles for Star Trek magazine. His work has appeared on both the New York Times and USA TODAY bestseller lists, and his television episode was nominated for a Sci-Fi Universe magazine award. You can chat with David about his writing at Facebook.com/DRGIII.