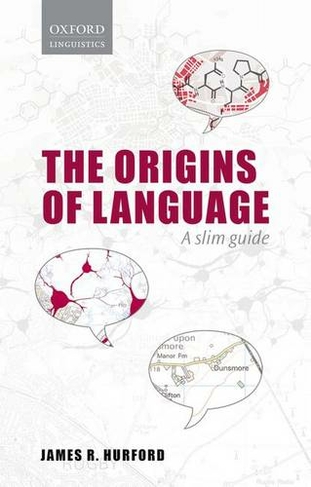 Origins of Language A Slim Guide

Also available on eBook for £12.83. Click here to purchase from Rakuten Kobo

Origins of Language: A Slim Guide offers a concise and accessible overview of what is known about the evolution of the human capacity for language. Non-human animals communicate in simple ways: they may be able to form simple concepts, to feel some limited empathy for others, to cooperate to some extent, and to engage in mind-reading. Human language, however, is characterized by its ability to efficiently express a wide range of subtle and complex meanings. After the first simple beginnings, human language underwent an explosion of complexity, leading to the very complicated systems of grammar and pronunciation found in modern languages. Jim Hurford looks at the very varied aspects of this evolution, covering human prehistory; the relation between instinct and learning; biology and culture; trust, altruism, and cooperation; animal thought; human and non-human vocal anatomy; the meanings and forms of the first words; and the growth of complex systems of grammar and pronunciation. Written by an internationally recognized expert in the field, it draws on a number of disciplines besides linguistics, including philosophy, neuroscience, genetics, and animal behaviour, and will appeal to a wide range of readers interested in language origins and evolution.

James R. Hurford is Emeritus Professor at the University of Edinburgh, where he was previously Professor of General Linguistics from 1979 until his retirement in 2009. Over the last 25 years he has pioneered the rebirth of serious scientific interest in the origins and evolution of language. He co-founded with Chris Knight the biennial international conferences on the evolution of language (known as EVOLANG), with Simon Kirby the Language Evolution and ComputationResearch Unit at the University of Edinburgh, and with Kathleen Gibson the OUP series on language evolution. His previous publications include The Origins of Meaning (OUP 2007) and The Origins of Grammar (OUP 2011).