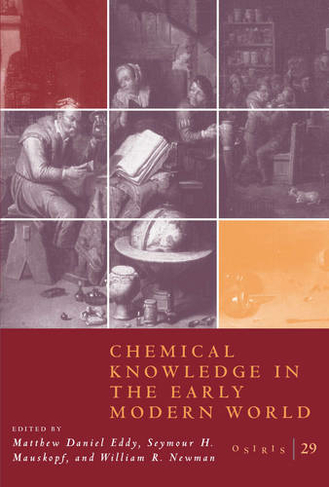 The last twenty-five years have witnessed some provocative transmutations in our understanding of early modern chemistry. The alchemist, once marginalized as a quack, now joins the apothecary, miner, humanist, and natural historian as a practitioner of "chymistry." In a similar vein, the chemical revolution of the eighteenth century, with its focus on phlogiston and airs, has been expanded to include artisanal, medical, and industrial practices. This collection of essays builds on these reappraisals and excavates the affinities between alchemy, chymistry, and chemistry from the sixteenth to the eighteenth centuries. It reveals a rich world of theory and practice in which instruments, institutions, inscriptions and ideas were used to make material knowledge. More generally, the volume will catalyze wide-ranging discussions of material and visual cultures, the role of expertise, and the religious and practical contexts of scientific inquiry.

Matthew D. Eddy is a senior lecturer in the history of science and culture at Durham University. Seymour H. Mauskopf is professor emeritus of history at Duke University. William R. Newman is the Distinguished Professor and Ruth N. Halls Professor in the Department of History and Philosophy of Science at Indiana University.