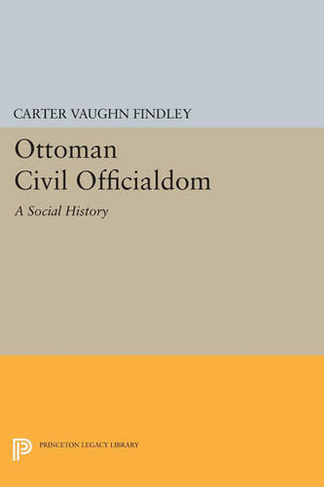 Ottoman Civil Officialdom: A Social History (Princeton Studies on the Near East)

In this sequel to his highly acclaimed Bureaucratic Reform in the Ottoman Empire, Carter Findley shifts focus from the organizational aspects of administrative reform and development to the officials themselves. A study in social history and its cultural and economic ramifications, Findley's new book critically reassesses Ottoman accomplishments and failures in turning an archaic scribal corps into an effective civil service. Combining scrutiny of well-documented individuals with analyses of large groups of officials, Findley considers how much the development of civil officialdom benefited Ottoman efforts to revitalize the state and protect its interests in an increasingly competitive world. Did reformers' initiatives in elite formation significantly broaden the social bases of officialdom and its capacity to represent Ottoman society? Did prospective officials profit from educational reform so as to achieve higher levels of qualification over the generations? How did cultural tensions of the reform era affect civil officials? To what extent did impersonal procedure and new ideas of professionalism supplant patronage and old scribal role concepts? How well did the state succeed in rewarding good service and protecting its officials against shifting economic conditions? The answers to such questions illuminate major issues of social integration and cultural change and clarify links between economic conditions and changing forms of political activism. Originally published in 1989. The Princeton Legacy Library uses the latest print-on-demand technology to again make available previously out-of-print books from the distinguished backlist of Princeton University Press. These editions preserve the original texts of these important books while presenting them in durable paperback and hardcover editions. The goal of the Princeton Legacy Library is to vastly increase access to the rich scholarly heritage found in the thousands of books published by Princeton University Press since its founding in 1905.