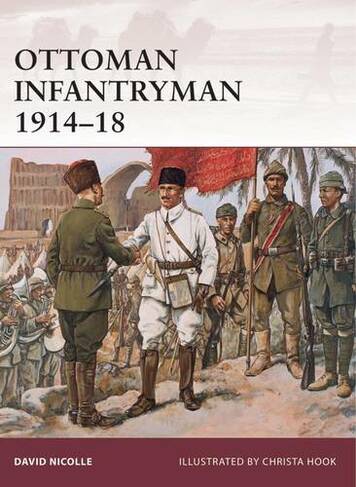 Following the Balkan Wars of 1912-1913, the Ottoman Empire undertook a massive military retraining program. Although many histories have depicted the Ottomans as a poor fighting force, this was more often due to poor leadership and logistics. The typical Ottoman soldier, the asker, was tough, well-trained, and courageous. While fighting over varied terrain from Gallipoli, to Mesopotamia and to the Caucasus, they proved themselves to be able front-line troops. This is the first English-language book to focus exclusively on the Ottoman infantryman in the First World War. Using a combination of first-hand accounts, period photographs and specially commissioned artwork, it explores the recruitment, training, and combat experiences of these often-neglected warriors. Illustrations (some col.)

Born in 1944, David Nicolle worked in the BBC's Arabic service for a number of years before gaining an MA from the School of Oriental and African Studies, London, and a doctorate from Edinburgh University. He has written numerous books and articles on medieval and Islamic warfare, and has been a prolific author of Osprey titles for many years. The author lives in Leicestershire, England.